Winder Today
Winder is a thriving community and many families continue to maintain farms.  There are a few dairy farms but the main crops are grain, hay and some corn.  A large share of the acreage is dry farms.

Winder is very proud of many of its residents who have become notable in the world.  Among these are :  Joe J. Christensen, President of Ricks College (now BYU-Idaho) and General Authority of the LDS church; Robert C. Geddes and Robert L. Geddes, State Legislators, and three Oneida Stake Presidents—Robert Lindhardt, Shirley Palmer and Robert C. Geddes.

Location and Name
Winder is north of Preston on Highway 91.  Geographically, the original borders of Winder extended from Bear River on the south to the clay hill on the north, a distance of about eight miles.  Its west border includes the little mountain and goes east about five or six miles to the hills that slope into Riverdale.  Winder was named after John A. Winder who was a counselor to President Joseph F. Smith in the LDS Church.  In its earlier history Winder was comprised of three distinct sections, each known by a different name.  The northern end was known as “Roscoe,” which was the Roscoe School District at that time.  The center section was known as “Poverty Flats.”  The southern end was known as “Battle Creek.”  These latter two designations comprised the Winder School District for many years.  Battle Creek is still distinguished by that name today.

First Settlers
The earliest history goes back to January 29, 1863, when the battle of Bear River was fought between the Northern Band of the Shoshone and the U.S. Army.  About 500 soldiers were dispatched for this purpose under the command of Colonel P. Edward Conner from Fort Douglas in Utah.  Prior to that time, earlier settlers had a great deal of trouble with the Indians.  This battle brought an end to the Indian troubles that they had in the territory.

In 1878, the Utah Northern Railroad was built and Battle Creek became an important railroad center for the narrow gauge railroad.  At that time, the town consisted of a round house, two saloons, two stores, a hotel and an amusement hall.  When the railroad built the town in 1878, about fifteen dwellings were built, but the railroad in 1886 moved its depot and dwellings to Eagle Rock and most of the people moved away.  Today only a few families remain in the Battle Creek area.  The primary landmark today is the Bear River Massacre Monument which is reverenced by the Shoshone Indian Tribe every year on the anniversary of the massacre—January 29th.

​​​The history of Poverty Flats began in 1892 when the Taylor brothers left Fairview and homesteaded there..  About the same time the Corbridge brothers also homesteaded in the area.  Agriculture was difficult until irrigation water was brought in from the Oneida Canal (Twin Lakes) in 1908.  Culinary water was supplied from wells which were dug 50 to 60 feet to find suitable drinking water.  Sagebrush had to be cleared and the farm equipment was very rudimentary making the task very slow.

Excerpts from:
The Oneida Stake, 100 Years.
History of Winder, compiled by Karla Catanni.

​​​The history of Poverty Flats began in 1892 when the Taylor brothers left Fairview and homesteaded in Poverty Flats.  About the same time the Corbridge brothers also homesteaded in the area.  Agriculture was hard until irrigation water was brought in from the Oneida canal (Twin Lakes) in 1908.  Culinary water was supplied from wells which were dug 50 to 60 feet to find suitable drinking water.  Sagebrush had to be cleared and the farm equipment was very rudimentary making the task very slow.  The first house in Poverty Flats was built in 1904 by Alonzo Corbridge.  Another problem for early settlers was the building of roads.  Today many canals and two reservoirs have been built.  Irrigation has evolved from flood irrigation to sprinkler-hand lines to wheel-move to many center pivots.

The Roscoe Territory, which is the northern part of Winder, was first known as the Church Ranch, which was used to pasture hundreds of head of cattle and horses.  About 1900, the Armstrong brothers purchased the ranch and were very instrumental in forming the Strongarm Reservoir Irrigation district by which it was still known in 1984. 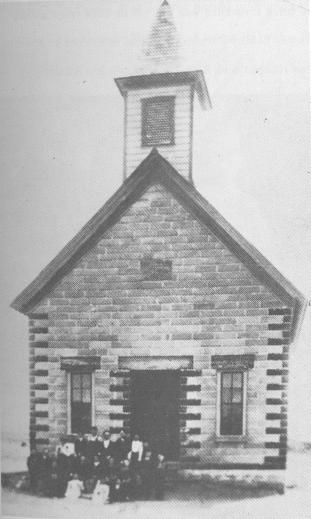 The Winder School overlooking Battle Creek valley in old Bridge Porte.  This was built in 1905.  There was one room and one teacher:  J. G. Nelson.  The building was dismantled by Ed Talbot of Winder who made a home from the cement blocks.  Picture from the Hometown Album, #418. 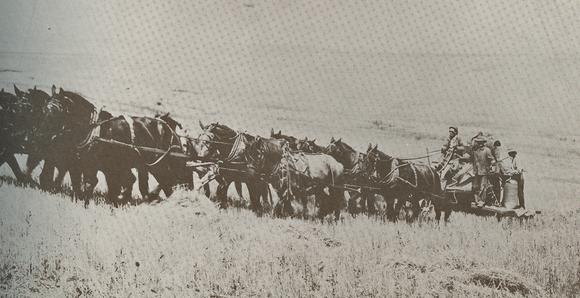