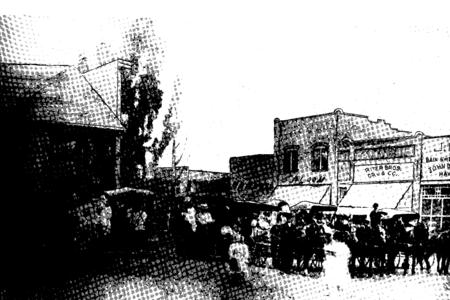 Dennis Winn established Preston’s first store, a “lean to” he constructed on the side of his home.  His merchandise consisted of groceries, some small farm implements, and supplies for freighters.  Mrs. Lucy Sabins also sought to take advantage of the freight route.  She furnished her home and opened its doors in 1880 to the public as a boarding and rooming house.  It was located on the south part of her property and became known as the Cottage Hotel. 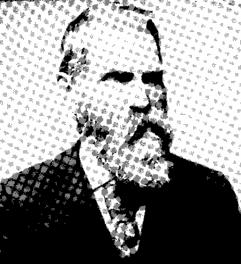 Education
Before the construction of the Worm Creek School, homes or private facilities of the people had were used to educate their children.  The first community school was conducted in 1877 in Robert M. Hull’s log granary. Verena Foster, a girl of sixteen, was the first teacher.  As with all early schools, her subjects were the three R’s and spelling.  Books had to be shared and pencil and slate were used to record the new learning.  The new log school building was ready in 1879 with Mary Heller as the first teacher.

Name and Location
Located on the flat, at the junction of Highways 91 and 36 is the county seat of Franklin County:  Preston, Idaho.  Prior to 1881, the flat was known as “Worm Creek” [pronounced “crick”].  Those that settled this area were predominantly Mormon and their leadership came from the LDS Church President in Salt Lake City, Utah.  The name Preston was chosen for the area in the following manner as recorded by Baltzer Peterson:

On May 14, 1881, a special meeting was held.  Some of the Church Leaders at Salt Lake City objected to the name “Worm Creek” as pertaining to any Church Organization.  They thought that a more appropriate name should be given the Ward for they were not in favor of the name “Worm” being used when it pertained to anything connected with the Church.  Mrs. Rachel Porter, wife of Bishop Porter, had the privilege of suggesting the name “Preston” in honor of Bishop William B. Preston of the Cache Stake, and who later became the presiding Bishop of the Church.  Thus Preston became the name of the Ward and the Community.

First Settlers and Early History
The first permanent residence within the present city limits of Preston was established by Dennis W. Winn in 1868.  He built a frame home 32 by 16 feet.  The house was located a mile southeast of the city center.  Due to the lack of water on the sand ridge or the Preston Flat, settlements had surrounded the Flat before the first homes were built there.

That Preston would arise on the Flat seems to be a matter of both logic and providence.  Its present location in the center of approximately twenty surrounding farming communities suggests its naturalness as a place for business growth.  Mormon President Brigham Young recognized the appropriateness of the spot and foretold of its growth when returning from a conference in Bear Lake Valley in 1870, while the site was yet barren.  Having his driver stop the light spring wagon, he got out and concluded, “Someday there will be a city here.”  The LDS Church was the life of the community during the early times.  Its officers were not only the spiritual leaders but the political leaders as well.  They directed civic and religious affairs in the area.

Churches
Elisha R. Laurence was the first presiding elder of Worm Creek branch.  He served from its inception in 1877 till 1879 when the branch was changed to Worm Creek ward with Nahum Porter (bishop, David Jensen and Elam Hollingsworth (counselors), and Israel West (clerk).    With the organization of the ward a greater number of people were brought into church service.  Wide participation served to bring the people of the community together, and to unite them for other community projects indispensable to growth.

Mrs. Martin Johnson and Mrs. Hans M. Lund served many years as midwife and practical nurse.  Mr. H. B. Lamoreaux possessed some dental and medical skill.  The first physician was a Mr. Shipp who came from Salt Lake in the early 1880s.

William Chapman operated Preston’s second store and was the town’s first postmaster.  The store was owned in partnership with his brother-in-law, James Bosworth.  About 1881 their business was temporarily located in a little shack behind the home of William Gibbon at the corner of Fourth South and State Streets.  Later they built a small room on the two hundred blocks on South State.  As postmaster Chapman handled mail in a section house near the tracks and later in connection with the store.  Henry Meyer followed him as postmaster.  The ambitious investor and merchant William C. Parkinson came to Preston in 1884, buying out the merchandise of Chapman and Bosworth.  Soon afterwards he erected the first business building at Preston’s main intersection on the southwest corner of State and Oneida Streets.  In those early days such stores handled “anything from calico to horse liniment.”

Other businesses were soon established:  blacksmithing had been done by Alfred Alder, Shem Purnell, and Charles Spongberg on their farms.  In 1885 Hugh S. Geddes and Peter E. Nielson opened a shop on the present site of the Central School [now Ireland Bank].  Andrew Nash was also the blacksmith.  A furniture store was opened the same year by J. S. Head.  The next year Charles Hobbs constructed a two story building; the lower floor being used for a confectionery and the upper floor for dancing and other amusements.  There followed in 1887 the construction of a second building at the main intersection of Preston, William Head built a second general department store, managed by his son Samuel.  It was located on the northeast corner of Oneida and State Streets.  By 1887, Preston had the appearance of a new and prospering community.

Preston was incorporated as a village in 1900 and as a city in 1912.  The new city of Preston, Idaho became the county seat of Franklin County in 1913 culminating a long effort to divide from Oneida County.

When Andrew Jensen was collecting historical data for the Mormon Church in 1890 he wrote the following about Preston Idaho:

Preston is in the Oneida Stake.  It contains 106 families belonging to the church, most of whom live in a scattered condition on their farms and ranches within a scope of country, about four miles square. … It contains sixteen ten acre blocks and is perhaps as beautiful a town site as can be found in Southern Idaho.  It is being built up quite fast, and fine thrifty shade trees are planted along the sidewalks of the principal streets.  A Stake Academy building is also in course of erection, which when completed will add considerable importance to the town. … There is room and land for a large number of Saints yet, and I have not for a long time seen a new settlement in the mountains that I would rather recommend to my friends who are seeking homes than Preston.

Early in the year 1879, the impending dominance of the Flat to the new area of settlement became apparent when the people on the west side of Worm Creek were able to bring about a relocation of the school and meeting house then under construction.  Work on the building had started in 1878 when it was brought up to the square.  Its location was two and one-half miles to the east of Preston.  The people on the west side of Worm Creek soon realized this location was not in the center of the settlement and wanted to move the school where it would be close enough for students to walk to school.  The decision was to move the building and a site was chosen on the south end of Soren Peterson’s homestead.  The logs were moved to that spot and under the direction of Nahum Porter the new building was erected.  It was sixteen by eighteen feet with a pine floor and a dirt roof, with split logs on legs being used as benches.

Others followed until 1884 when changing conditions brought about the moving of the school house once again, this time to the center of the emerging community.  There was no regular salary, but students were assessed one dollar per month.  More often than not, this was paid in goods.  One man gave a quarter of venison for his sons’ tuition.

Amusement
The log school house served for community activities such as socials, dances, and weddings with most activities under the auspices of the Church.  Edward Clayton would get the pitch with his tuning fork and lead community singing.  For dances Nels and Baltzer Peterson played their violins, while Clayton, George and John Taylor played the accordion or mouth organ.  Soren Peterson did the calling.  There were games, readings, and parties for many occasions.  The old school house was the scene of many lively times.  Homes were used as places of entertainment also.

Economics
A canal bringing water to the Flat was constructed in 1881 and stimulated growth.  By 1887 Preston had developed the appearance of a business and community center.  The Utah and Northern Railroad extended its newly acquired railroad line over the Flat in 1878.  Battle Creek, a boom town, sprang up on the Bear River as a supply center and repair yard.  Charles R. Hobbs began what later became a thriving business by hauling coal from the Battle Creek Railroad Station in the wintertime to those who could afford it. 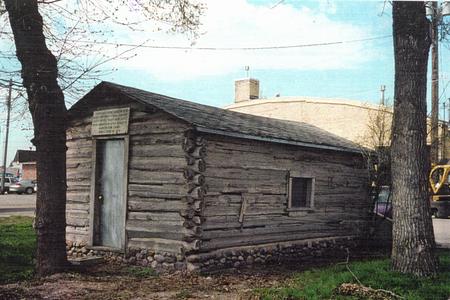