At the height of political and religious controversy, Oxford received several blows from which it never recovered.  In 1886, the land office was moved to Blackfoot, Idaho and in 1887 the railroad terminus was moved to Swan Lake, Idaho and later further north to Pocatello, Idaho.  Business declined dramatically and residents slowly drifted away to find better opportunities elsewhere.  By the turn of the century, little was left to remind the old-timers of the “boom” years.

AGRICULTURE
Horses and mules were the power behind all life in early settler days, and it was not uncommon to find thirty horses on a large ranch.  They helped plow, plant and harvest the fields of hay and grain.  They dragged logs from the mountains for all building projects, hauled freight to Montana, pulled buggies or sleighs for personal travel, gave children rides to school, and provided entertainment on William Fisher’s Race Track.  Quite a few Oxford ranchers had a small flock of sheep.  During the summer the sheep were pastured on the mountain or in the groves nearby.  Twice a year, before going out on summer range and soon after coming back before winter, it was necessary to shear the wool.

CHURCHES
Oxford was unique in Franklin County history, as it is one of two communities that had churches outside the LDS faith.   At one time Oxford had four churches: Methodist, Presbyterian, Mormon, and Josephite.  The Presbyterian Church was located northeast of the town site.  It was later abandoned, then moved into town to become Oxford Merc.  The Reorganized church met in the Oxford School. The first Mormon meetinghouse was built in 1886.  It was a one-room, log building, located a little north and east of the existing building.  Later a new and spacious building was built.  Prior to 1877, Clifton was a part of the Oxford Ward.  It was also the headquarters for the Oneida Stake of the LDS Church.

SCHOOLS
The first school was built of logs in 1867 and Henry Howell was the teacher.  By 1880, four schools were in this fast-growing town.  They included a public, Congregational, Methodist and  LDS. The last school, a public elementary, was built in 1911, and it was called the Oxford School.  Grades 9-12 were hauled to school in Downey in a canvas-covered Chevy truck driven by Dan Hatch. The people of Oxford were very proud of their new school.  Many teachers graced the halls from 1911-1947 when the school closed its doors and students attended for one year in Swan Lake.  The building was torn down in 1983. 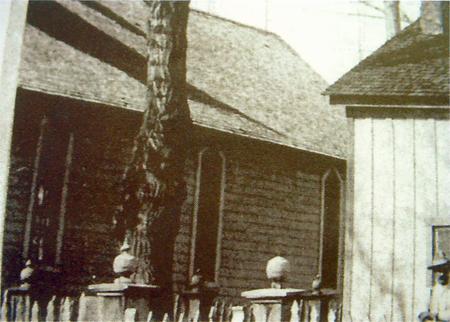 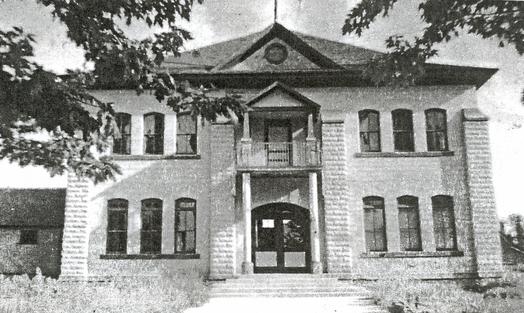 The north side of the Methodist Church.

Serious problems emerged within the community following the passage of the Edmunds Act of 1882 which challenged the Mormon community’s practice of polygamy.  Bigamy laws were changed to make simple cohabitation a felony.  The Idaho legislature passed the Idaho Test Oath in 1884 making every citizen wishing to vote or hold office swear they did not practice polygamy nor act as a member of any organization that did.  This effectively disenfranchised the Mormons and excluded them from participating in government.  Federal Marshalls, including future Idaho Senator Fred T. Dubois, opened their offices in Oxford with their main focus was on the capture and prosecution of polygamists.

AMUSEMENTS
The town created its own amusements.  Dances were held, with their own orchestra to furnish the music, and several brass bands were organized. The Oxford School was the site of spelling bees, the Reorganized LDS church meetings, civic meetings, a manslaughter trial, basketball games, boxing matches, roller skating and dances.  Drama groups were organized in which some of the finest dramas of that time were presented, and baseball groups were organized.  The Oxford Baseball Girls was a women’s baseball team which was quite unusual for that period.  The 4th of July was celebrated with a salute of firearms or cannons at the break of dawn, followed by a parade, a good program, a ball game in the afternoon and races for the young, ending the day with a grand ball at night. 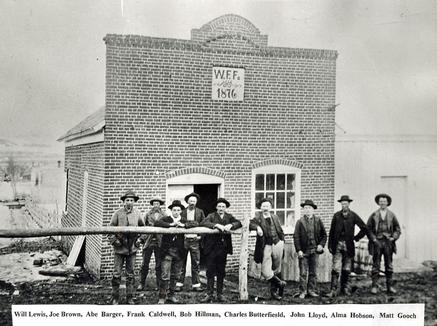 Oxford is a dis-incorporated village located north of Clifton on the northernmost edge of the west side of Cache Valley.  First called Round Valley, the origin of the name of Oxford is not known.  It has been part of Oneida, Bannock and Franklin counties.  Despite its small size, Oxford has “one of the most fascinating tales in Cache Valley history.”

PRE-SETTLEMENT
As one of Idaho’s oldest settlements, Oxford traces its beginnings, as do most northern Cache Valley towns, to Franklin, the first permanent settlement in Idaho.  Following the Bear River Massacre in 1863, in which hundreds of the Northern Band of Shoshone Indians were killed by Col. Patrick Conner and his California volunteers, E. T. Bensen scouted for new settlement areas in northern Cache Valley.  Marriner W. Merrill found the Oxford country to look very promising.

FIRST SETTLERS
In 1864, settlers felt it was safe to move into northern Cache Valley.  In the fall of that year, John Boice and Noah Brimhall built cabins where Oxford now stands.  More settlers arrived in 1865, but conditions were difficult due to Indian scares--requiring the settlers to build a fort-- and a plague of grasshoppers which destroyed crops and gardens.  Alphonse Brossard, William G. Nelson, King Hillman, and William Fisher were some of the early settlers.  In 1877, the town was almost exclusively Mormon, but by 1884 the population included as many non-Mormons as Mormons in the city.

ECONOMICS
The discovery of precious minerals in Montana and the opening of cattle ranches along the Snake River Plateau began to change the fortunes of Oxford residents as the need for closer markets materialized.  Commercial activity and the growth of business opportunities began to stir.  Freighting to Montana and Northern Idaho became very lucrative as early as 1862.  By 1864, Alexander Topance could boast of buying a $36 pig in Brigham City, Utah, and selling it at the mines for $600.  Butter, eggs and flour were said to be literally worth their weight in gold.

Opportunities to provision, repair and man these freighting expeditions proved to be the economic boost needed by Oxford and adjacent communities.  Because of the freighting influence, a unique deviation from the typical Mormon village settlement pattern developed between Oxford and Clifton called “Stringtown.”  Houses dotted both sides of the roadway for five miles and goods and services were sold to the wagon drivers as they went by.

Alphonse Brossard, William G. Nelson, King Hillman and others shipped 40,000 sacks of flour to Montana according to the May, 1866 Deseret News.  By 1873, “an estimated 600 freighters hauled wagon loads of goods from Logan, Utah to Montana … “with an average of perhaps eighty wagons on the road night and day.”  Warehouses, boarding houses, supply stations, terminals, and saloons were all by-products of the freighting business.

Three major events occurred in 1879 which accelerated emigration to Round Valley (Oxford):  the arrival of the Utah Northern Railroad with its terminus at Oxford; a U.S. government land office set up to regulate and issue land patents; and the establishment of a newspaper titled The Idaho Enterprise .  Within a short time, Oxford boasted three general stores, two newspapers, one meat market, two wagon and blacksmith shops, a billiard hall, three sawmills, two shingle mills, one planning mill, one hay derrick manufacturing shop, a post office, a half-mile race course, the Palace and Oxford hotels, a furniture store, and a hat shop where the latest creation—the Oxford Walking Hat—was the “latest novelty and all the rage.”  Saloons dominated the main street of Oxford for several years, since there were now as many non-Mormons as there were Mormons living in the city.

The economic heart and center of activity, news and gossip was the “People’s Store” owned and operated by one of Oxford’s most remarkable characters, William F. Fisher.  He was a bishop, county assessor, ex-Pony Express rider, local dentist, breeder of fine race horses and a “man with a big heart, fine intelligence, of jovial nature and a love of fun and sociability.”