LOCATION AND NAME
Clifton is located on the west side of the valley, north and west of Preston on Highway 23.  In the beginning, the residents called this place "Rushville" because of the many rushes that grew in the meadows.  Later the name was changed to Clifton because of the cliffs on the side of the mountain overlooking the settlement.

FIRST SETTLERS
The settlement of Clifton was begun in 1865 by a small company of Latter-Day Saints (Church of Jesus Christ of Latter-day Saints) who left Franklin, Idaho in search of a place suitable for permanent homes. Attracted by the beauty of the mountains and acres and acres of meadow land fed by the streams flowing from the mountains, the meadows in Round Valley proved of untold value to them because their livelihood depended mainly on livestock. Prominent in this early company were the families of T. C. D. Howell, William Pratt, and William Davis.  The first summer the settlers lived in temporary quarters.  When winter came they moved to Oxford, returning to their farms in the spring of 1866.  They began making plans to build homes but were forced to give up these plans when hostilities with the Indians increased.  They then moved back to the old fort at Oxford where they lived for the next three years.  The men went back and forth to their work.  In 1869 the settlers returned to their farms and remained there.  In the meantime, other families arrived, and from this time on the settlement grew rapidly.

ECONOMICS
The first houses were mostly made of logs.  The logs and wood for fuel were brought from the canyons west of the town.  Because of the lack of equipment, this canyon work was hard and tedious.  The logs were chopped by hand, then trimmed and dragged, sometimes for a long distance to where they could be placed on wagons.   Sometimes, if the weather permitted, the men would do canyon work in the winter, bringing the logs out on bobsled.  This winter canyon work was difficult and dangerous.  There were several accidents and one death as a result of it.  The death was that of Charles Carlson who was caught with his team in a snow slide. Mr. Carlson left a wife and several small children.  The mother died four months later leaving a newborn child.

There were a few of the early houses made of rock.  As soon as lumber was available, frame houses were built.

At first, the settlers possessed their land by squatter’s rights, with the land being allocated to them by the bishop.  When the government surveyed the land, many adjustments were made that caused some farmers to lose land, resulting in much trouble.  Farm equipment was very basic, and repairs had to be done mostly at home until a blacksmith shop was established.

Marketing produce and obtaining supplies were difficult.  The nearest markets were far away and prices were unstable.  Transportation was slow and cumbersome.  After the harvest was completed, the grain not kept to feed livestock was taken to Franklin by ox team where a part of it was ground into flour and the remainder either sold for cash or traded for supplies.  After a few years a mill was established at Weston, which was much more convenient for the people of Clifton.  The trips usually took two days, so were not made often, making daily supply uncertain.  Of necessity, as many articles as possible were produced at home.  Some of these were meat, butter, cheese, laundry soap, tallow candles, honey, jam, quilt batts, vegetables, and a wool material called Linsey Woolsey.  Cords, spinning wheels, and looms were standard equipment of most of these early homes.

Because there were so many uses for wool, sheep were very necessary animals.  Nearly every farmer had a small herd that was assembled with other herds and taken to the foothills to feed in the summertime.  These sheep were tended by a community herder who was paid by the farmer either in cash or produce.

Farm work was slow and laborious; therefore the farmers found it an advantage to cooperate with one another.  At harvest time they went from field to field, reaping, tying, and shocking the grain. Often they competed in this labor, the competition making the task less monotonous.

Competition among the women was most evident in quilt making.  The “quilting bee” not only served as a labor lightener but became a social function as well.  The women also assisted one another in soap making and fruit drying.  With the exception of jams made with honey, drying was the only means of preserving fruit. 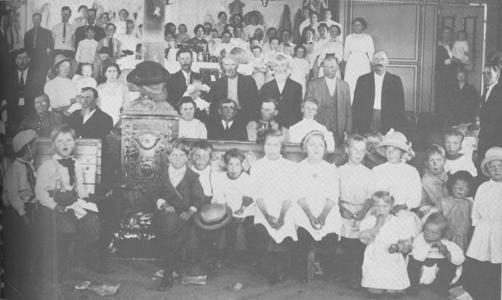 In 1869 a branch under the Oxford Ward of the Latter-Day Saint church was organized in Clifton.   A Relief Society was organized that same year, and a Sunday School was organized the next year.  In 1871 a log meeting house was erected one-half block south of where the Clifton Mercantile (now Papa Jay’s) stands.  This building was used for all church gatherings, recreation and school.  The Clifton Ward was organized in 1877.

During the period of epidemics the good work done by the Relief Society cannot be praised too highly.  All members were called to aid in the care of the sick.  The women took turns going two together to relieve the family and be on hand in case of death.  Births were attended by midwives, the most prominent being “Aunt Jane” Howell.  She was called by the church to take a course in midwifery, and over the 30 years she served, it is said that she only lost one case of the 500 she attended to. 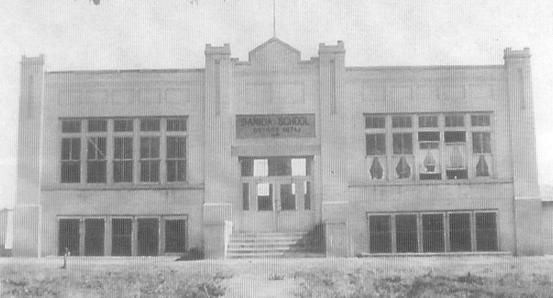 The Longfellow School in 1904.  This school was located where the current LDS church now stands.  It has been demolished.

The Champion Header in the Clifton hills.  Among those who operated headers in Clifton were John Sperry, Arthur Sant, and Henry J. Howell.  Photo source, The Hometown Album, by Newell Hart.

Inside the old Clifton church, a bazaar about 1912.  This church and the nearby Opera House burned down at the same time in 1923.  Photo source:  The Hometown Album, by Newell Hart.

The first store was opened by the LDS Relief Society and managed by Susan Harmon.   Post Office functions were added simultaneously in Clifton, Dayton and Weston between 1870 and 1872.  Cooperative stores were the norm during the United Order period of the LDS Church (1874-1880).  During the town’s history, the post office was housed in the store, with the first share-space facility located in a structure built by John Sant, Jr., son of the early settler John Sant Sr.  A co-operative store was established in 1878 under the supervision of Bishop Harvey Dixon.  It did well for a few years, but being founded on small capital was finally closed.  Supplies sold at the store were brought in by team from Ogden, Utah.  Subsequent owners were William F. Garner, A. D. Henderson, and Jack and Jane wood.  The store-postal relationship continued until the U.S Postal Service constructed a building in 1986.

AGRICULTURE
Early Clifton was a farming community.  From the beginning, the early settlers were faced with problems such as education for their children, distribution of water, establishment of land ownership, marketing of produce, obtaining of supplies, etc.  For culinary purposes, the early settlers were forced to use water from open streams and surface wells.  This was very unsatisfactory, but it was several years before they were able to install a proper culinary water system.  It is probable that the epidemics of typhoid and diphtheria that appeared at intervals during the first years were a result of contaminated water.  These episodes were often very severe, and because there was no medical aid available, death resulted in a number of cases.  Sometimes whole families were stricken, and there were cases where two of one family died within a week.

EDCUATION
The first school was started sometime in the early 80’s in a log building that served for all public gatherings, but since there were few books and since school was taught only during the three winter months, progress in learning was slow.  Another early school was taught in Rushville district by Henry N. Howell in the lean-to of his house.  The Clifton and Rushville schools were consolidated in 1902, becoming District 11 of Oneida County.  The new district was bonded to obtain money for the new building which was completed in 1903.  It was called “Longfellow School.”  At least three generations of children were educated in this building.

AMUSEMENTS
In spite of the hardship of those first years, the settlers found time for amusement.  Their amusements were dancing, drama, church picnics, programs, and home socials.  The drama consisted of home plays, mostly tragic, performed in one end of the old log building, with a curtain drawn between the audience and performance.  The lighting was done at first by tallow candles, later replaced by coal-oil lamps.  But the lack of illumination did not detract from the integrity of the actors or the quality of the performance.  At least the early drama supplied the need of its day.

Some of the early dances were the quadrille, waltz, polka, schottiso, and varseuvienne.  The first music for these dances was furnished by James (Jim) Daniels on his fiddle.  Later music was furnished by Adelbert and Orson Henderson and their violins, one playing melody, the other second.  Occasionally for diversion a “Basket Dance” would be held.  This was an affair where the ladies brought supper packed in an attractive basket, which was auctioned off to the gentlemen.  The gentlemen would then search for the name of the owner, concealed in the basket, and be her partner for supper.  Another form of dancing was a soft shoe routine called Step Dancing.  This was done by individuals and for the amusement of others.

In the late eighties a fife and drum band was organized.  This band was always on hand to perform at public gatherings and was especially in the lime light on the fourth and twenty-fourth of July, those two days being the main events of the year.

Horse racing was the most popular amusement of this period.  Wm. McDermott was the promoter of this event.  He loved horses and had been a jockey before coming to Clifton.  Horse racing continued to be the main sporting event for a number of years, Clifton competing with Oxford in this sport on all special occasions.

EXCERPTS FROM:
"History of Clifton, Idaho, 1865-to 1896," by Verena Howell Henderson and William Henderson, with addendum by Lilian Perkins, unpublished.