AGRICULTURE
The soil in the Coulam area and on up into Banida became very alkaline and unproductive.  The Banida-Coulam area is said to have been the first place in the county where a land drainage program was undertaken.  It began in 1921.

EXCERPTS FROM:
“Coulam,” in The Oneida Stake, 100 Years of LDS History in Southeast Idaho, Preston, Idaho, 1987

The Trail Blazer, Daughters of the Pioneers, updated and revised in 1976 entitled “History of the Development of Southeastern Idaho”

The Community of Banida,  Centennial, 1910-2010, written and compiled by Karla Catanni, assisted by Robert and Carma Geddes, and Judy Lindhardt Liebes, 2010

All the freight for Montana was loaded there.  The same summer, there was a great boom at the Caribou mines, ninety or a hundred miles north of Soda Springs.  In addition there was a great deal of travel through Gentile Valley.  Dunnville flourished through 1877.

In 1878 the terminus of the railroad was made at Oneida in Marsh Valley and Dunnville died a natural death.

EXCERPTS FROM:
The Community of Banida—Centennial, 1910-2010, written and compiled by Karla Geddes Cattani, assisted by Robert and Carma Geddes, and Judy Lindhardt Liebes, 2010, pages 6-7.

Coulam had a railway station that was used for several years.  Eli Howell, station master, lived on the second floor.  Harold Larson and his daughter Alice are in the picture. 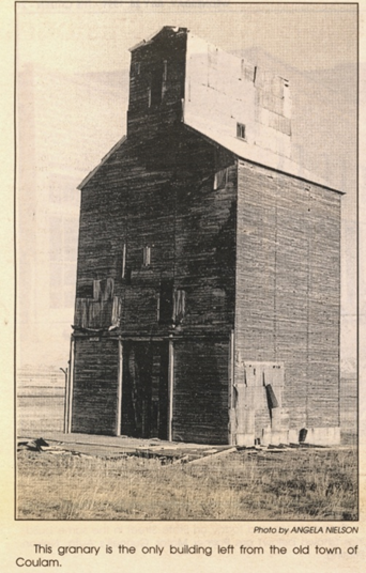 An important event occurred in 1876-68 when the Utah Northern Narrow Gauge Railroad extended its line, passing through Battle Creek, and then building a terminus in the Banida area which they named Dunnville after Mr. Dunn, one of the railroad officials.  Nathan Smith (see history of Banida) had a good-sized boarding house there at that time.  His ranch became the terminus.  It was about one and a half blocks northwest of their house.  During the construction of the railroad, the family ran a boarding house for the construction men.  Here his beef cattle were used to excellent advantage.  From this point, he freighted to Montana, driving by himself four yoke of oxen on two wagons.

​    A town of tents and lumber houses sprang up as if by magic.    It was a very busy railroad camp.  And there were stores, boarding houses, saloons, blacksmith shops and everything that goes with a thriving town.  A great deal of business was done which helped the people a great deal.  It made a good market for butter, eggs, cheese and vegetables.  Fred J. Kisel of Ogden had a very large tent filled with all kinds of canned goods and groceries with both a wholesale and retail department. Mr. C. Lewis had a hotel in a large tent and several small ones.  T. Morrison, one of the first settlers, applied for, and got, the contract to carry the mail from Dunnville to Soda springs.  There were many eating houses for the time it lasted.

LOCATION AND NAME
The Idaho Encyclopedia (1938) states:  “Coulam (Franklin County) is located three miles northeast of Clifton, on the UPRR. …Coulam is said to have been named by the railroad and had an active life span of about ten years.  Arthur Peterson of Pocatello, a railroad historian, stated in 1976:  “The first time the name appears on the O. S. L. employees time table is in 1914 when it was as a spur 960 feet long, and the same in 1915.  Coulam is now considered a ghost town. [see map section for location of Coulam.]

ECONOMICS AND FIRST SETTLERS
Coulam at one time was a business center with many nice homes, a store, an implement house, a confectionery, blacksmith shop and lumberyard.  There are now (1976) only a railroad station, elevator, one house, and many cement sidewalks to recall what has been.

Sometime between 1915 and 1920 a station was built, and presumably discontinued in the 1920s.  Eli Howell of Clifton was the station agent and his family lived upstairs in the station.  Howell said that the station was established to handle business pertaining to the Twin Lakes reservoir being built in the hills . . .and its irrigation pipeline.

An agricultural settlement, which like Coulam was between Clifton and Oxford, was settled in 1867 and took its name from the wild rushes that grew in the area.  Rushville was on the shores of a marsh, which was good for pasturage, but when rainfall increased in the 1870s the marsh turned into a lake and forced Rushville residents to the higher ground of Clifton. [See information on Clifton for more details]

At the site of the Bear River Massacre, Battle Creek came into being when the railroad had a stop there.  The new town of Battle Creek grew steadily until 1886, at which time the railroad company moved its buildings to Eagle Rock.  The final blow came when the railroad tracks were removed in 1890.  Most of the people moved with the tracks.  Only five or six families remained after that time. 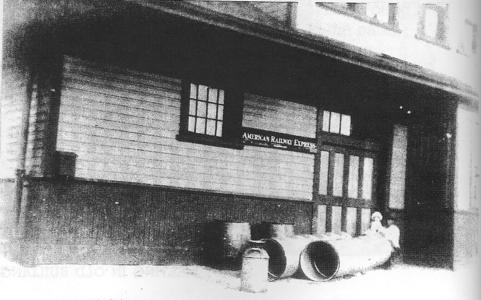 Just north of the station was the Inter-Ocean Grain Elevator which was managed by Hugh L. and Mose Goddes for about ten years.  The business center was located about a quarter of a mile east of the railroad on the road to Banida.  Robert C. Geddes opened his Coulam Mercantile store in about 1912. Robert had a chance to get more land near the railroad tracks and he with other men wrote to the head office of the Oregon Short Line in Salt Lake City to have a spur and grain elevator installed at Banida.  It was not long until it was granted and trains were stopping at Coulam.  A post office was then established.  More families moved into the town and many new homes were built.  The railroad people renamed the spur “Coulam.”   The Banida leaders urged Robert to build in Banida, but he preferred to have his business closer to the railroad—and thus founded a town [an area extension of Banida].

Robert built a large ten-room home and a store which carried all kinds of merchandise as well as farm implements.  Coulam was now a thriving center for trading and shipping of cattle and grain and a large grain elevator was built.  People from all around would come to buy groceries in exchange for their grain.  The Gem State Lumber Company put up a lumber yard, and other enterprises were soon established.  A few years later Robert sold the store to his brother-in-law, William L. Randall.

Other Coulam businessmen were D. O. Harvey, lumber yard; Les Pearson, confectionery, and Jern Erickson who owned and operated a blacksmith shop.  Edgar Mason had a butcher shop and also built a lovely big red-brick home.  R. C. Geddes also built a big home that was used as a hotel when needed.    There was also a beet dump to the north, plus holding pens and loading docks for cattle.