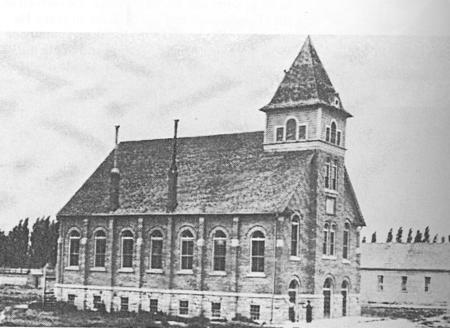 Location and Name
Weston is located on Highway 34, the first town east of the Idaho Utah border on Highway 34, or the Westside Highway.  Two theories exist about the name of the town.  Some say it was named after Mary Ann Weston Maughan, wife of the first presiding elder, John Maughan.  Others maintain that it was named West Town, as it was the first town on the west side of the valley, then later shortened to Weston.

Early History and First Settlers
Originally, Weston was settled by a group of pioneers from Richmond, Utah.  These pioneers came in April of 1865, and made their headquarters three miles west of the present town site known as “Cedarville.”  The following families comprised the first group:  Christopher Funk, Hans Funk, Wilson Robbins, Niels Georgetown, Warner Hoopes, Samuel Rogers, Carl Nelson, Hans Kofoed, Soren Hansen, Rasmus Nelson, J. C. Jensen, J. C. Nelson, John Maughan, and Mathew Fifield.  These pioneers erected crude dugouts, using logs to support the dirt roofs.  They worked long and hard getting some land cleared, and finally had some crops planted.  Crickets devoured the first year’s crops and Indian trouble forced them to leave during the growing season of the second year.  However, some of them returned in the fall, made a partial harvest, and then returned to Richmond for the winter.

A building program began in 1868.  Log cabins were built and used for everything—religion, amusement, school.   Gradually the log houses were replaced by houses built with lumber and brick with walls lined and insulated with clay adobes.

Early challenges included Indians, crickets and grasshoppers, rattlesnakes, the Bear River as a barrier to the rest of the valley, and weather conditions.
At one time Weston was second only to Preston in the number of people who lived there.

Economics
A business owned by John Maughan, a blacksmith repair shop run by William Gil and Fred Fredrickson, a flour mill operated by James Mack, a sawmill managed by William Gill, and a co-op store managed by John Clarke were all founded to make Weston a better place in which to settle.  Later there was an opera house.

Church
The first meeting place was used only ten years because of the increasing population, and a desire for something more adequate.  On July 24, 1876, the foundation for a new meetinghouse was laid by members of the branch.

It was dedicated on January 23, 1877.  By this time Weston was fully organized as a ward.  Bishop Maughan was called to Arizona on a mission and Christen Olsen was set apart as presiding elder until Alexander Alma Allen came to Weston to take over the duties as bishop.  In 1909 a new chapel was added; it has since been replaced.  In 1950, the ward purchased a welfare farm, adding a reservoir in 1958.

Agriculture
The crops grown by the early pioneers were those that would sustain them through the winter and summer as well:  wheat, corn, potatoes, and many garden vegetables.  An average diet consisted of eggs, fresh milk, homemade butter, and bread made from the flour stash.  This was supplemented with an occasional rabbit, grouse, fish, deer, and a butchered pit, along with chokecherries, elderberries, service berries, and currants.  The Shoshone tribe taught the settlers how to gather grass seeds and dig for edible roots. Later dairies and hay fields were added. Most early settlers had a few sheep and chickens, horses and cattle.  Water for crops and household use was always a problem.​

In 1867, a change to the present site of Weston made possible the cultivation of the land lying east and south of Weston.  Weston was also located on the main freight road to Montana.  The houses were fortified against the Indians, a flour mill was built on the creek, and Weston became a permanent settlement.  John Maughan acted as the first bishop and directed land distribution.  Some of the early families that followed the initial settlers were those of John Clarke, Henry Gassman, Alex Lundquist, Joseph, John and William Coburn, Chris Lund, Lars Peterson, Lars Fredrickson, Hyrum Rose, Henry McCullouch, William Heusser, John H. Campbell, and Samuel Preston.  These men and their families were all living in Weston by 1890.

Schools
An 18x20 foot log school house was constructed in 1869.  John Clark was the first teacher, but school was only held for three months in the winter.  This was later replaced with a two-story brick grade school and a high school.

Excerpts from:
The Oneida Stake:  100 Years of LDS History in Southeast Idaho. published by the Preston North Stake, 1987.

A History of Weston,Idaho.  Schvaneveldt, Jay. 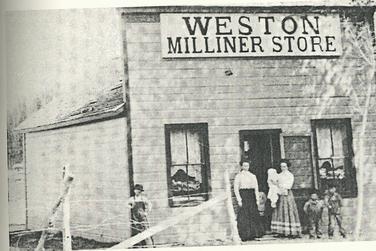