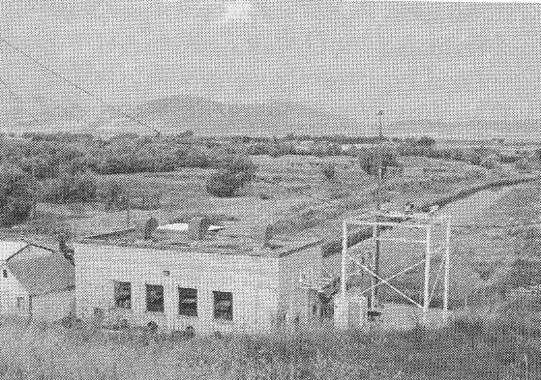 ECONOMICS
The first business house in Fairview was a blacksmith shop owned by Robert Bodily.  It was situated one mile west and one-half mile north of the center of Fairview.  The first store was built in 1890 by a group of men and was called the Fairview Mercantile Company.  The store was owned by various owners but was destroyed by fire in 1926.  It was located across from the church house on State Street.  The property was sold to Lon Harding who built a home, store and service station in 1938.  Upon Lon Harding’s death it was managed and owned by various people until it was closed permanently in1958.  The first post office began in 1883 with W. J. Underwood as postmaster..  In 1917, it was decided to purchase the Cafferty Dance Hall which was located next to the ballpark at a cost of $550.  It was used for recreation until 1936.  About 1885, the Public Square was purchased by Bishop Heman Hyde from Furman Cafferty; a Studebaker wagon was given in exchange for the land.  Electricity came to Fairview in 1916, the first radios in 1927, and the first television in 1953.

The Utah-Idaho Central Railroad with its electric cars came through Fairview and connected Logan to Preston with passenger rail service.  It was discontinued in 1947.

From the very beginning, religion and education played a very important role in the development of the community.  At first, Fairview children attended school in Lewiston.  Then Calysta Strickland taught school in her home.  A church and school were built in 1877.  The first school was three-quarters of a mile from the church house corner. The first school buses were covered wagons run by Edwin Cole and Clarence Bodily.  A north-end school was consolidated and everyone attended the red brick school house until 1956 when it was closed and all students were transported to Preston for school. 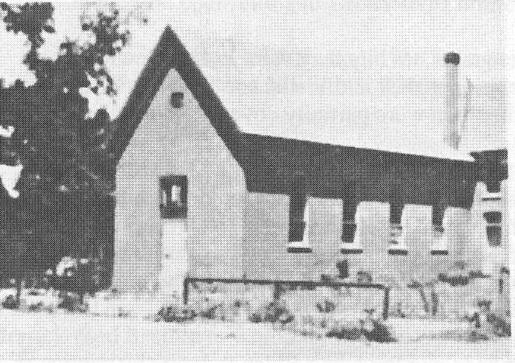 LOCATION AND NAME
Fairview is located south of Preston, and north across the Utah state line from Lewiston, Utah.  The name Fairview was suggested by James Egbert because on a clear day they could see the Logan Temple, and because they had such a wonderful view of the surrounding country.

FIRST SETTLERS
The first settlers--Mormon pioneers who came in the winter of 1869--were Patison D. Griffeth and George A. Griffeth, Sr.  They took up land on the Bear River about three miles west of the church house corner.  In April of 1870, Sarah Gibson Griffeth came with her two sons to make her home with her husband Patison.  They lived in a covered wagon until their one-room house was finished in 1872, and this was the first house built in Fairview.  The early summers were spent herding sheep and cattle and the winters were spent in Hyde Park, Utah.

From 1872 to 1889 many more families settled in Fairview.  Some of the first families were the Bronsons, Coles, Choules, Gilberts, Hydes, Egberts, Inglets, Warricks, Adams, Whittles, Rawlings, Smiths, Taylors, and others.  Today many of these same family names still have a presence in the community.

Fairview was settled by families that had strong moral standards, a strong work ethic, and integrity.  Today those same moral standards, work ethic and honesty still exist.  The current residents owe a strong sense of gratitude to their pioneer ancestors who had great foresight in developing the irrigation system used today, the culinary water system, and the road system.  Many notable people trace their roots to Fairview and are proud to say that they were raised there.

AGRICULTURE
Farming has been the life blood of Fairview although the farming methods and crops have changed dramatically over the years.  Horses were the main source of power until the 1940’s.  Since the advent of tractors, farming became more mechanized.  When Fairview was first settled families homesteaded on farms averaging from 40-80 acres.  Each farm had a small herd of cows, chickens, pigs, and sheep.  Crops included hay, grain, sugar beets, peas, and potatoes.  Today the main crops are hay and grain.  The small dairy and chicken farms have disappeared and have been replaced by large dairy farms.  Many of the current residents have jobs off their land.

One of the first great problems in the new settlement was water.  The land was sandy and dry and water had to be found to survive.  Worm Creek, several miles to the north and east, soon supplied the first irrigation water.  Ditches were dug the long distance with pick and shovel.  In 1874, the Cub River Irrigation Company was formed with Bishop Thomas at the head.  From time to time the canal has been enlarged and canals continued to be added in order to bring more water to the farms.  In 1916, the Lewiston Bear Lake Company built a pumping plant on Bear River west of Fairview which supplied Fairview with water also.  Irrigation started out as flood irrigation and has evolved to sprinkler and wheel line today.  There are many center pivots in Fairview.  Many of the open canals have been filled in and have been replaced with underground pipe and pressurized gravity flow systems.

At first the people attended church in Lewiston.  The first LDS ward in Fairview was organized on July 20, 1884 with Heman Hyde as the first bishop.  The first church house blew down in a wind storm and later a rock church building was erected in 1891 and was used for church meetings, dramas and other meetings. The Relief Society began its wheat donations in 1888.  The first to donate were Eliza Rawlings, Margaret Hall, Amelia Gilbert, Celia Malinda Cole, Calysta Strickland and Sarah Adams.  They also started the first work meeting in August 1888.  In 1900, church statistics showed 381 members, 75 families, 10 High Priests, 11 Seventies, 26 Elders, 14 Teachers and two Deacons.  There were 97 children under eight years.  About 1912 the tithing office was furnished for a Relief Society House.  It stood one-fourth mile east of the church house.  The north-end Primary was consolidated with the south-end Primary in 1928.  In 1926 a church was built on the corner of State Street and 4800 South and in 1936 a recreation hall was added.  This building is still standing and when the new church house was built in 1976, it was sold and is presently being used for apartments.

Culinary water first came from open wells, springs and pumps until in 1914 when it was decided by the people to bring water by pipeline into the homes.  In order to do this a meeting was held and it was determined that funds would need to be borrowed and a corporation formed.  In April of 1914, a village was formed and it remained in effect until 1953 when it was dissolved and the Fairview Water District was formed.  The first water line came from Cherry Creek east of Franklin.  The trench was dug with a steam engine and by men with pick and shovel.  Later another spring was bought east of Preston and added to the system.  Finally both were sold and a larger spring was procured and a large reservoir was built to hold the water which came from Mapleton.  Today Fairview has an excellent culinary water system which is adequate to the doubling population in the last 30 years.

AMUSEMENTS
Dances were held in the small school house.  In the summer, the bowery was the place for socials and celebrations.  July Fourth and Twenty-fourth were big days in the memory of ward members.  Ball games and horses races and a dance were standard activities for these celebrations.  In addition, Christmas programs, dinners, rabbit hunts, rag bees, quilting parties, sewing bees, candy pulls and house parties kept everyone closely knit as a community.

The rock church was built of stone, some of which came from the old temple quarry at Franklin.  The walls were three or four feet thick.  The building was used for every purpose:  church, dances, celebrations, ward reunions and weddings.  It was torn down after the new, modern church house was erected in 1926-27.