The siphon bridge over Bear River as the stream comes down the Narrows into Riverdale.  From The Hometown Album, #397. 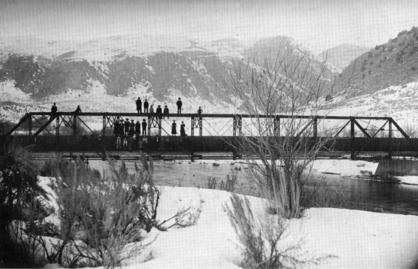 ECONOMICS
In 1889, the Falls area settlers constructed a building where they could hold school, church and community activities.  It was 18 x 30’ and made of rough lumber.  It was used for two years until replaced by Riverdale’s first official school.  Begun in 1892, it was originally a mile west of the present church building but was later moved to the lot just north of the church.  It was made of logs that settlers brought from the canyon and was heated with a wood-burning stove.  Charlotte Keller was the first teacher at this school.  Students were from age six to twenty and could attend when their parents could spare them from farm work.  If they wished to graduate from eighth grade, they would need to go into Preston to complete their work.

​Because the children living on the north side of the valley had to ford the river to attend, and in the spring the heavy run-off made it impassable, several families set up school in their own homes.  In 1909-19, a new cement-block school was built with two rooms and an entrance hall between them.  Two teachers taught four grades each, making it possible for the students to graduate from eight grades there in Riverdale before going into Preston to attend high school if desired.

On October 20, 1879, a meeting was held at the home of Hyrum J. Smith to organize a branch of the Church of Jesus Christ of Latter-day Saints in Riverdale.  The branch became a ward on November 28, 1882 with Peter Preece as bishop.  Riverdale was a part of the Cache Stake until June 1, 1884, when the Oneida Stake was organized.  At this

time, the three settlements were combined into one ward.  A new meetinghouse was constructed and dedicated when Leonidas A. Mecham was serving as bishop in 1901-02.  It was a one-room, frame building 20 x 40’.  When classes were held, curtains hung on stretched wires were drawn to separate them. At this time the church membership was 126, composed of 16 families.  Construction of the present-day meeting house began in March of 1928 and though meetings were held in it in 1929, it was not formally dedicated until June 6, 1937 by Rulon G. Wells.

ENTERTAINMENT
The early residents of Riverdale had to plan their own entertainment.  House parties, surprise parties, candy pulls, and just plain visiting were favorite activities.  In the winter, they enjoyed ice skating, sleigh riding, coasting, and skiing.  After an evening of fun, they would often gather at one home for some home-cooked food.  The Riverdale Ward had a good baseball team.  Dances were held weekly.  Quilting bees, rag bees, Pioneer Day (24th of July) celebrations, old folks’ parties, and dramas were presented yearly.   Christmas and missionary parties were also popular.

The Battle of Bear River Monument.  Since the monument was erected, the site has been renamed the Bear River Massacre site.

Bearing right at the fork in the road onto Highway 34-36 and continuing five miles north of Preston, one will come down a steep hill into the Riverdale valley.  Originally, Riverdale was named “Hansen’s Bottom” for Emilius Hansen.  Currently, the community is called Riverdale after the Bear River, which snakes its way across the valley floor for close to ten miles.

Emilius Hansen was the first to herd his cattle and build a home on the south bank of the river during the summer months of 1872.  He and his family lived there until 1875 before abandoning it.  Joseph Nelson and Stillman Pond came that year and built homes on the north side of the river, which was the beginning of the permanent settlement.  Edmond Nelson and William g. Nelson, formerly of Oxford, joined them in 1877.  They were followed by William Van Noy, George and Abraham Davis, and a Mr. Morrison in 1878.  By the end of that year, there were nine families living there.

As other families came, the bottom was divided into three distinct settlements because crossing the river was difficult due to annual flooding.  The eastern part of the valley (upper Riverdale) from what is today the Oneida Narrows Dam opening where it crosses Highway 36, all the way down to where the valley narrows about two miles west on the highway, was called “the Falls” because of the fall of the river at that point prior to the dam being built.  The next settlement going westward was considered “Riverdale” proper (middle Riverdale) because the hills formed a dale along the river.  The furthest west part of the valley was known as “Battle Creek” (lower Riverdale) where Highway 91 now cuts through the valley going northward to Banida.  It was named for the area where the famous Bear River Massacre took place.

The total area of these three settlements is approximately 23 miles in circumference.  The lush, green meadow grass made the valley ideal pasture land and cattle were trailed from as far away as Hyde Park in Utah to graze there.

After many years of raiding and skirmishes, it was on January 29, 1863, that a detachment of California volunteer infantry in the United States Army under the leadership of Colonel Patrick Connor, attacked a Shoshone encampment and killed hundreds of men, women and children, having been allegedly mistaken for a different warring band.  There is a detailed description of the event at a memorial site that overlooks the area further north on Highway 91 as it climbs out of the valley. 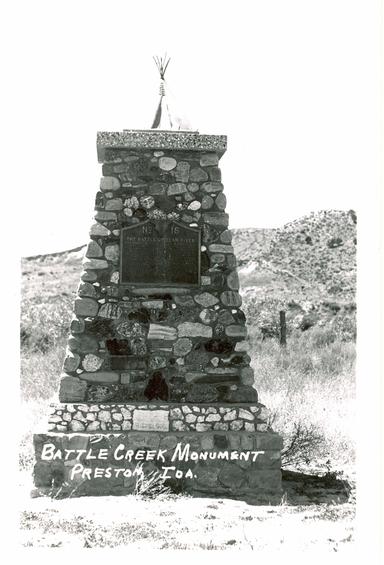