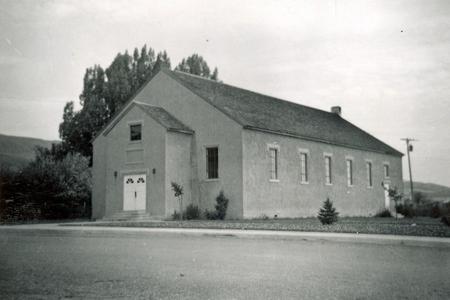 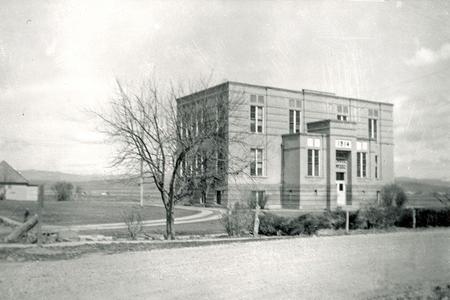 SCHOOLS
The first public building in Dayton was a one-room log structure which was hauled up from Weston in the early 1880s and used as a school.  It was replaced by a two and one-half story brick building.  From the time the Dayton District School, as it was usually called, was built until about 1940, the yards were covered with shale.  The district abandoned this schoolhouse in 1957, and it was temporarily used as a church.  The elementary students were bussed to either Weston or Clifton.  The building was demolished in 1962.  A consolidated West Side High School was built in 1949.  Harold B. Lee Elementary was built in 1990 and educates all of the west side children.

Reference: The Hills of Home:  A History of Dayton, by Don and Cleone Dalley

Dayton is located west of Preston on Highway 23 (Westside Highway).  It is south of Clifton and north of Weston.

PRE-SETTLEMENT
The first-known inhabitants of Cache Valley were a band of the Northwestern Shoshone Indians called the Pan Widuka, or the “fish eaters.”  Though migratory, they maintained summer camps along the Bear River and Logan River to catch and dry fish which was a staple in their diet.

Beaver brought the American Fur Company--The Sublette party, including William Sublette, Jim Bridger, a man named Campbell and a man named Williams, plus many Indians— into the valley.  They began caching their furs to be retrieved later—thus the name Cache Valley.

The Hudson Bay Company sent an expedition into Cache Valley in 1833, followed by John C. Fremont, on a scientific and exploring expedition in the summer of 1843.  Another explorer of Cache Valley was Captain Howard Stansbury of the Corps of Engineers in 1849.  When the Mormons came in 1847 to the Salt Lake Valley, they sent a company and several thousand head of cattle in 1855 to Cache Valley to graze.  The following year, 1856, a group of pioneers under the leadership of Peter D. Maughan entered the valley intending to form a permanent settlement in the Wellsville area.

THE COMMUNITY OF DAYTON EMERGES
Like most of the communities in Cache Valley, Dayton began as an LDS settlement when Joseph Chadwick, who came from the village of Franklin in 1867, settled near the mouth of Five Mile Creek.  He was soon joined by Peter Poole, Robert Taylor, Stephen Callan from Brigham City, and Richard Wickham.

In 1865, Nathan Packer, William Davis, George Washburn, Joseph Nelson, Russell Homer, and Thomas Mendenhall settled at the mouth of Deep Creek [on the Riverbottom].  They lived in dug-outs and log houses with dirt roofs and dirt floors.  In 1866 George Mendenhall, Edward Young, James Frew, George Freestone, George Walters, Mrs. Wheeler and family, and Orson Shipley joined them and the Bridgeport Ward was organized.  They held school and church in private homes.  This was the first settlement between Franklin, the oldest town in the state, and Oxford.

They crossed Bear River by fording it or crossing on a ferry boat until 1869 when Nathan Packer  and others built a toll bridge.

An overland stage station was also built at Bridgeport.  John Tout was the stage agent.  Here they changed horses and continued on their way.  The present bridge was built in 1967.

The Oregon Short Line Railroad came through the settlement in 1890.  A flag station was erected and designated Card.  However the community had been known as Dayton as early as 1881 when Cache Stake Presiding Bishop William B. Preston named it.  According to Bishop Preston, he seemed to always arrive in the area in the daytime, so he named the settlement Dayton.  In 1906 a more permanent station was built and the name was changed from Card to Dayton to coincide with the name of the community.

Land was acquired by (1) settlers taking unoccupied land by a short residence and payment of $1.25 an acre; (2)  The Homestead Acting permitting any citizen over twenty-one years or any head of family, to acquire 160 acres of public land by giving legal notice of his intention, called “making entry,” then living on the land for five years and making improvements; or (3)  “squatter’s right,” where a family simply moved onto a piece of land and stayed.  It is safe to say that the early settlers of Dayton acquired  their land by one of these methods.

Water meters were installed during the late 20s or early 30s.

The unrewarding job of village marshal was hard to fill and changed often as he was also the village water master which required him to read meters and do his best to collect delinquent water bills.  This was an ongoing problem from the beginning.  He was directed to shut the water off for residents who were seriously in arrears.  He was responsible for repairs to the village water system. His marshal duties required him to attend public meetings, dances and elections and maintain law and order.  He was to maintain proper speeds on the street corners, and was also pound keeper

There is not one single square block within the city proper, going against the usual procedure for city planning in a Mormon community.  A city park was completed in 1981 and dedicated by Idaho Governor John Evans.  It isn’t recorded when the Dayton cemetery was first laid out or who was the first person to be buried there, but  village records show that the cemetery was turned  over to the village of Dayton in 1916 for the sum of $10.  It is assumed that the Dayton Ward turned it over to the village.

BUSINESSES
Early business included a simple store kept by Joseph Chadwick in his house.  Other storekeepers were Franklin B. Wooley, Phillips and Atkinson, Paul Larsen Meat and Grocery, Doren Perkins, P. Jones Mercantile, D. A. Perkins and the Ivan Waddoups garage and service station.   A man named Neilson had a blacksmith business in the early 1900s.  Artie Henderson had a store and service station, which was later rebuilt to house a combination pool hall, tack shop and refreshment counter.  After Perkins Merc burned, Victor and Alice Waddoups opened a store in 1947.  Several other families have owned and operated this store which is now being used as a residence.

PUBLIC BUILDINGS
In 1961, the Union Pacific Railroad removed the depot in 1961.  The city hall was built in 1965 next to Perkins Park and the post office was erected in 1986. 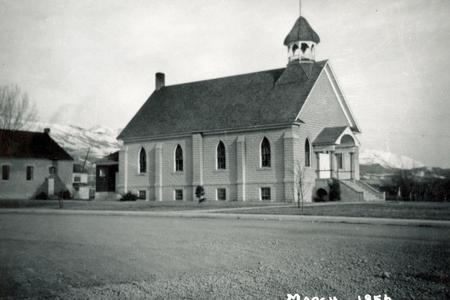 In 1914 a village was organized in order to bond to build a water system.  The committee of four men who pursued the possibilities were A. L. Jensen, James Atkinson, J. P. Schow and Paul Larsen who was appointed secretary.  These men were the forerunners of a long list of faithful and devoted public servants

On July 13, 1914, the county commission granted the residents of Dayton the status of a municipality to be known as the village of Dayton.  Joseph Hansen, D. W. Buttars, J.P. Schow, James Page and Charles Jones became the village board.  Paul Larsen remained as secretary.  The budget for the fiscal year was set at $500.  A. D. Erickson, attorney, was chosen as legal counsel and he drew up a set of rules and ordinances for the new village board.

Part of the duties of the village board was to watch for and help control the spread of contagious diseases.  In the October, 1914 meeting, D. W. Buttars moved that the president of the village board, the marshal, and members of the board act as the village board of health.  In 1916, Joseph Hansen and D. W. Buttars worked with the engineer to determine and designate the location of permanent roads to be constructed.  An amusement hall was built in 1935 and James Page had the thankless job of supervising the scheduling, maintenance and use of it.  The building was torn down in the late 1960s. 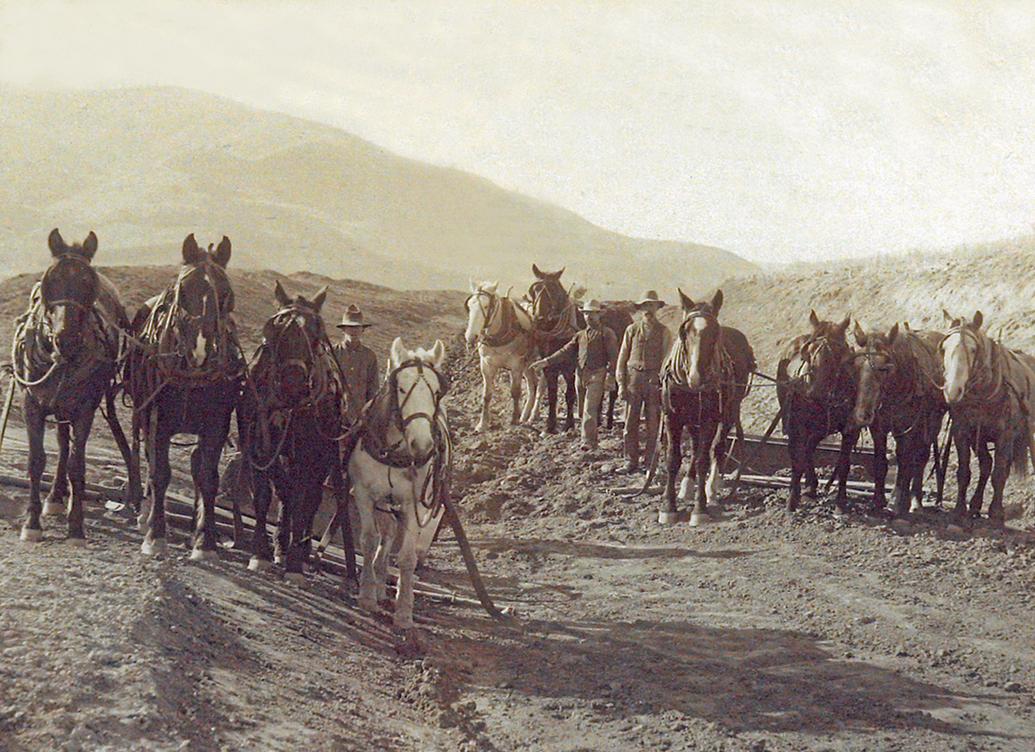