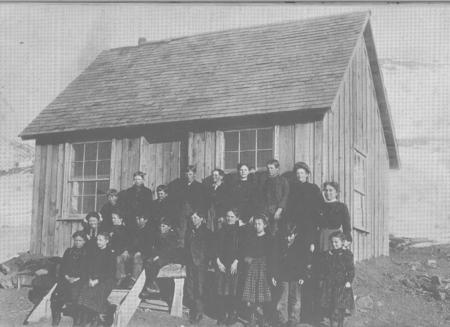 The Treasureton Church was a large one-room building erected in 1906.  It had a fine hardwood floor for dancing and was a very popular hall.  In 1953 a new chapel was built and the old building was converted into a Cultural Hall.  Picture from The Hometown Album, #501.

Later, a few businesses sprang up:  the Benjamin Hymas store, the Nathan Smith, Jr., a calcite mine and plant, the Ira Bergeson/Russell Johnson sawmill and much later, the service stations operated by Ernest Conlin, Edward Paskins and William Sant.  There was also the Treasureton Creamery in 1905 which was located where the Treasure Canyon Calcite Company was located.  Farmers brought their cream to the creamery where delicious butter was made and wrapped.  Local young ladies were hired to wrap it.  R. C. Swenson of Preston was the manager.

replaced it.  It had two large rooms, two cloak rooms, two small rooms on the back side for the teacher to live in, and a coal shed.  There was a steeple on top, but no bell.  Each room had a pot-bellied stove in one corner with a metal circular shield around it, probably so the children wouldn’t get burned.

In the early 1920s, the two districts combined and the lower district schoolhouse was moved up behind the old cement church house to become a high school where students could receive the first two years of instruction, but they then had to attend another community’s high school to receive the last two years to graduate.  The Treasureton high school was only in operation for four or five years.

The school district was well-financed because of the taxes paid by the Utah Power and Light Company for lines that passed through the community, but equalization of taxes in the county ended the district with all of the Eastside becoming District No. 201.  In 1949, it was decided that all students would attend school in Preston and the empty buildings in Treasureton were soon torn down.

CHURCHES
The early community was part of the Clifton Ward of the Church of Jesus-Christ of Latter-Day Saints and it was necessary to attend church services there.  In 1882, the upper school and church house combination was built and the community was made a branch of Clifton Ward with George Sant, Sr. as the first Presiding Elder.  Others who served as early Presiding Elders were John Millington, 1884; George Sant, Jr., 1886; Benjamin Hymas, 1887; and William Treasure, 1890.

Treasureton is located approximately 10 miles from Preston on the extreme northern end of Cache Valley on Highway 34.  The town was named after early settler William Treasure, who in 1881 became the first postmaster when a post office was established on his land.  Another version of how Treasureton got its name involved an early visitor coming into Treasureton on the Oxford road.  Looking up to see the moon rising over the ridge of Rocky Peak that appeared close enough to touch, he exclaimed, “Well, this should be ‘Treasureton’—we’re up to the moon.”

The earliest settlement of the area began in the fall of 1868 when Wilson Robbins, Niels Georgeson (Jorgensen) and Soren Hansen came from the Weston area to settle along the east bank of Battle Creek, a few miles northeast of the Bear River Massacre site.  In the spring of 1871, Nathan Smith and George Sant, brothers-in-law, and their families came from Smithfield, Utah, and settled on the west branch of Battle Creek.  The Smiths stayed for about a year before moving further west to present-day Banida.  On December 24, 1871, Hans Hyrum Georgeson was the first child born in Treasureton to Neils and his wife Johanna.  In 1872, the Georgesons and Mr. Hansen moved back to Weston and Mr. Robbins went further north.  In July 1875, George Sant purchased the land from the three men and it has remained in the Sant family to the present day.

By 1875, there were a few more families settled along Battle Creek when William Treasure and his family arrived from Smithfield.  He was chosen as the first postmaster because his land was on the road from Dunnville to Gentile Valley along the previously used postal delivery route.  Other early settlers of note during this time were John Millington and Charles Wiliams, Sr. who arrived by 1877. Treasure, Millington and Williams were all brothers-in-law to George Sant.

EARLY HISTORY
The winter of 1875-76 was known as the “hard winter”.  Hay became scarce.  However, on the south slopes where the wind blew the snow off, there was a lot of grass.  The problem was how to get the livestock to the grass.  Sometimes, they could drive the stock over the crusted snow, but most of the time it was necessary to dig trenches through which the stock could pass.  The task of driving them became great and it required the help of the women and children as well as the men.  Most of the livestock survived, but they were weak and thin until summer came.  George Sant, Jr. measured the snow by the road on April 1, 1876.  It was exactly five feet deep.  The weather did not break until late April that year.

Stories are told by the descendants of Charles Williams, Sr. and later settler Charles Johnson of many Indians still inhabiting the area through the early years.  They would camp on the creek near the William’s home.  Many nights Charles Johnson was said to sit up all night with his gun in his hands to guard the family and the buildings.

ECONOMICS
By 1876, the Utah Northern Railroad expanded its terminus from Franklin, Idaho near to the Nathan Smith farm in Banida.  A town of tents and lumber houses sprang up there quickly.  The town was named “Dunnville” in honor of Mr. Dunn, one of the railroad officials.  It was the closest place for the settlers along Battle Creek to buy provisions shipped in by the railroad.  It had dry goods and grocery stores, boarding houses and saloons and blacksmith shops.  It was also a place where the families in Treasureton could in turn sell butter, eggs, cheese, and vegetables from their farms. 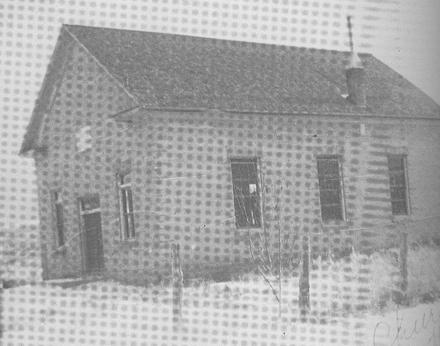 In August, 1888, Thomas Kirby purchased the first threshing machine in the area.  It was a horse-powered machine using twelve horses to power it.  For seventeen years, Tom Kirby ran the thresher from early fall until after snowfall and he threshed for people all over northern Cache Valley.  He took great pride in keeping the machine in perfect running order.

In the late 1880s, the idea was formed to bring some of Cottonwood Canyon water from the north into Treasureton through a canal.  Water would have to be taken out of Cottonwoood Creek far enough north so the canal was high enough to cross the divide between Treasureton and the Cottonwood Valley.  Originally, the canal was to go as far as the flat land in the south end of Treasureton going toward Riverdale.  Many of the men from the area worked on the construction when it started.  By 1905-1907, it was felt that a dam was needed to help with summer irrigation.  The Strongarm Reservoir was built which today is known as the Treasureton Reservoir.

The people in the early days had to make their own recreation.  They celebrated Utah’s Pioneer Day on July 24, whose religious history they shared.  On May Day, they picnicked, wound a maypole and selected a May Day Queen.  Dancing was one of the main forms of recreation.  The one-room Treasureton church building had a very good floor for dancing.  Its reputation spread until every dance had an overflow crowd which meant they eventually had to draw numbers for the dances.  Many romances budded into weddings as a result of the community dance.

On December 11, 1892, LDS Church Apostle Mariner W. Merrill and President George C. Parkinson and his counselors of the Oneida Stake presidency attended a meeting at the branch church house and organized the Treasureton Ward.  Benjamin Hymas was sustained as the first bishop.  In 1900, a cement block one-room church building was erected.  It was dedicated in 1906.  By 1918, there were more than fifty families in the ward and it had a recorded population of 342.

AGRICULTURE
Treasureton had very little irrigation so most of the land was dry-farmed.  At first, the people farmed the creek bottoms, but soon discovered that they could raise dry farm grains up higher.  They plowed further back up the hollows and on the hills.  They felt that God was always good to them and no crop failures were known; however, once in a while, some of the farms were damaged by a freak hail storm.

Treasureton was one of the last communities in northern Cache Valley to get electricity because of the extreme distances between farms and ranches.  In 1940, Utah Power and Light agreed to bring in electricity if certain conditions were met.  The local residents had to guarantee a certain minimum quota of use and make payment in advance.  It was an eventful day on September 13, 1940 when the power was finally turned on in Treasureton.

EDUCATION
At first, children were sent to nearby communities to attend school where they boarded with friends and relatives.  Within a short period of time, a room was provided in various homes in Treasureton for school.  Billy Rhodehouse was probably the first school teacher.