KEY TO MAP OF BATTLE CREEK

*The two-story building near the Round House is the railroad hotel.

*The space between the RR spur (Coal Bins) and the spur leading to the Round House was called “the RR Yards and Supply”, including lumber and coal stocks;
Indians and white transient labor used.

*RR company began moving its property buildings in 1886; railroad tracks taken up and RR abandoned through Battle Creek on completion of new RR line via Cache
Junction to Oxford (1890).

*The wagon and stage road (upper left-hand corner of map) went on the east side of Little Mountain.

The above information is all from Peterson’s Map.  See story below.  (Note:  Battle Creek, as a railroad town, began in 1878—15 years after massacre of the Shoshone/Bannock by the California Volunteers (January 29, 2863).  Location:  The town was situated just north of Bear River bridge about three miles northwest of Preston—as the crow flies.  nh)

What Do We Know About the Old Town of Battle Creek?

The map of Battle Creek by Newt Hart, included in this issue, is something of a news bulletin.  We believe this is the first time this map, or any likeness of Battle Creek for that matter, has been published.  We could find nothing in the way of photos of the place for our book, “Hometown Album.”  Railroad historians echo what other researchers say: “Nothing much is known about Battle Creek.”

Here is the story of this map:  The original was done many years ago by the late Baltzar W. Peterson, Preston’s historian who made up a scrapbook of the community.  A photocopy of this scrapbook is on file at the special collections Library, USU, Logan, A. J. Simmonds, librarian.  Kevin Alder of Preston, a student, was researching certain phases of our native history and came upon the scrapbook.  He brought me a Xerox copy of the original.  This was about a year ago.  (Kevin is a descendant of Charles Paull, Utah and Northern railroad engineer and owner of Paull’s general store in Battle Creek.  Kevin’s mother is Norine Sears Alder; his father was Lew Alder.)

The map brought by Kevin, and made originally by Baltzer W. Peterson, is not the one shown here.  This map was drawn from the Peterson original by Newt Hart, former Preston artist now working in Salmon, Idaho.  The original map was not suitable for reproduction.  The details were much too small.  Typed descriptive matter covered the page.  Nevertheless, the names and locations and information were all there and this enabled Newt to execute a close-up drawing.  Construction details of the two enlarged buildings are imaginative, though Peterson did tell us about the flowing well and the boardwalk.  Other buildings and objects are enlargements from the Peterson map.  The Indian was added because the terrible slaughter took place nearby, giving the creek and the town its name.

The railroad water tank, shown at the bottom, is authentic.  Arthur Peterson of Pocatello, a railroad historian, supplied us with a photo from which this was draw.  The picture was taken in 1884 in Dillon, Montana, and we are all assuming U & N built its tanks alike.  (The one in Dillon was filled by a pump powered by a windmill instead of by steam.)

We (CVN and Arthur Peterson) believe the original map to be authentic and have no reason to question it.  (Baltzar W. Peterson had a reputation for accuracy.)  The Trail Blazer, however, says that Battle Creek had two saloons and an amusement hall.  We only showed one saloon and no amusement hall, because this map is from Peterson’s drawings, not from the Blazer’s description.  Neither Peterson nor the Blazer said anything about telegraph lines.  The book Progressive Men (Chicago, 1904), on loan from Luella W. Bowman of Preston, gives the name of the telegrapher:  Buckley Fullmer.

Point by point, here are the things I “know” about Battle Creek:


First, the material in print:  From the Trail Blazer (Franklin County Daughters of the Pioneers, 1930)— 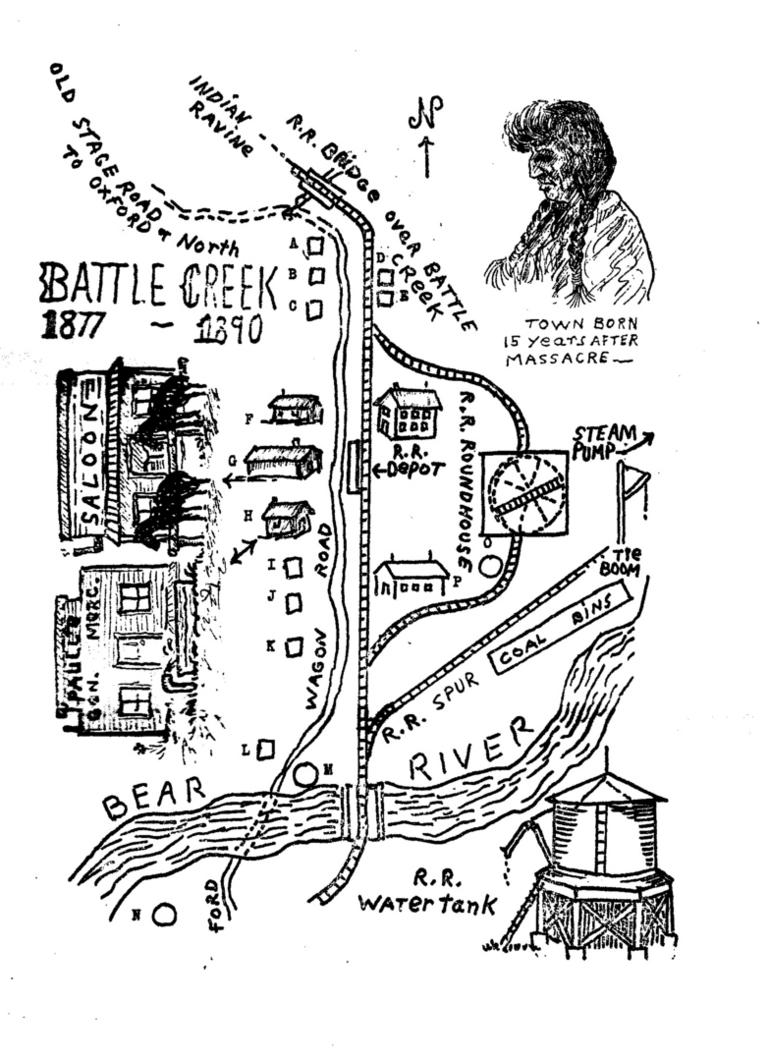 Our second illustration in the Battle Creek story shows an engineer and what was possibly his engine.  I found a large picture of Charles Paull in the Franklin Relic Hall during the recent Idaho Day celebration.  A few days later I took Newt down there and he sketched the likeness from the big oval picture.  A note by the picture read: “Charles Paull, first engineer on U & N railroad.”  Yvonne Butterworth Marshall, caretaker at the Relic Hall, said her grandfather (Elliott Butterworth, founder of the hall) had worked on the U & N— “so he probably knew Mr. Paull was the first engineer.”

The sketch of the engine was made from a photo sent to us by Arthur Peterson, the aforesaid railroad historian (and nephew of our own N. G. Peterson now of Pocatello).  This engine was called the “Franklin” and could have been named after our Oldest Town in Idaho.  The U & N came into Franklin 100 years ago (1874) and the town remained the northern frontier terminal until the RR began moving northward in 1878.

Newt said, “I made this sketch from the small picture.  It’s real close, but not perfect.  I hope the railroad guys won’t examine it too close.  If it was a horse, I’d know what I was doing—but an Iron Horse, that’s different.”

After the sketches were finished, they were sent to A. B. Dick mimeo in Salt Lake to be made into stencils by electronic process.

Many questions remain about Battle Creek” Why was this low river basin chosen for a Round House site?  Why were the hops and Round House moved in 1886 when the town was only eight years old?  What were the other towns in Battle Creek’s thriving league?  Franklin, Oxford, Eagle Rock?  What was the life like down in that lush meadowland?  “A man named Stewart” had a brass band—Did it play for dancing at the amusement Hall or the Saloon?  How much would we give for a tape recording of a night of dancing down in Battle Creek?  The town site and railroad grade, everything pertaining to the Battle Creek part of our native history, is all but obliterated—will some arm of The Establishment arrange to map or mark this before it’s too late?

The late Harold Manning has written about his father’s (Frank Manning’s) entrance into Battle Creek in 1884: --

“Frank’s sister Emiline was living in Battle Creek at the time of his arrival.  She ran to the yard to greet him as he rode through the rough wooden gate.  She was elated to see him—it had ben five years—and she hardly knew her handsome brother.  He was a six-footer with brown wavy hair.  Mack Winn, her husband, was the town marshal.  Frank stayed at his sister’s place through the early part of the winter.  He found Battle Creek to be a gay bustling town loaded with excitement and merriment, especially among the younger set …”

“The Utah Northern Railroad was built from Franklin to Battle Creek in 1878.  It was made a division point in 1881.  The town mushroomed overnight.  The railroad company-built repair shops with an eight-stall round house to take care of the engines, also company houses and buildings for the foreman and employees with their families.  The town also consisted of a store which was owned by Charles Paull, a hotel, an amusement hall, two saloons and about 15 dwellings.”

(Mr. Paull, father of Isis Theater founder George Paull, was an engineer on the U & N, running between Ogden and Battle Creek.  The store was presumably a sideline.  nh)

To continue with the brief Blazer account (slightly condensed): “John Winn built the first log cabin in 1877, a year before the coming of the railroad.  Esther Winn taught a school free of charge in her own home, any who wished to come, young or old, were welcome.  The first public school was taught by Ida McCoy in part of Charles Paull’s store.  The tuition was paid by the people.

“Some of the people in the town were Latter-day Saints; however, there was no church organization as the LDS there belonged to the Riverdale ward.  There was a Sunday school organization with George Carter, Curtis Hadlock and Heber Morrell in charge.  A brass band was organized and conducted by a man named Stewart.

“The population was over one hundred and the town continued to grow until 1886 when the railroad began moving their buildings to Eagle Rock, and in 1890 removed the tracks.”

Condensed from Progressive Men:
“Buckley Fullmer, the genial and popular station agent for the Oregon Short Line Railroad at Rigby, was born in Salt Lake City, 1852, the son of Almon and Sarah Follett Fullmer.  The family homesteaded in Cache Valley in 1878.  At age 22, Buckley had started to learn telegraphy and was sent as an operator to a lonely mining camp at the North Star mining district.  The conditions there proved so distasteful that he relinquished his efforts in this line until the spring of 1879, when he commenced his long period of activity in railroad work by becoming an operator at Battle Creek.  After 15 months at Battle Creek, he was transferred to Arimo as the station agent as well as telegrapher.  Later he served at Logan, Richmond, Oxford, Lorenzo, and Rigby.

“On June 25, 1875, he married Lucinda Monroe, a daughter of Marcellus and Lucinda Bousenbark Monroe, of Clifton.” 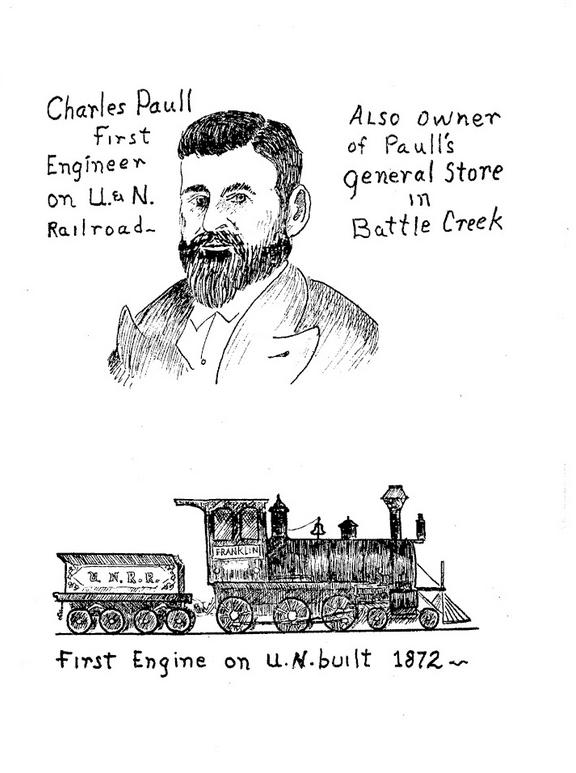