This marks the trail o the first communication between Cache Valley and Bear Lake Valley known as the Shoshone Indian Trail. In 1864, mail was carried to Bear Lake and snow shoes, a distance of 25 miles over steep and rugged mountains from Franklin through Cub River Canyon. In 1868, the Deseret Telegraph line was extended from Utah to Franklin, Idaho, and in 1871 on to Paris, Idaho. The halfway house where the carriers camped was near this site. The spring supplied them with water.

This monument marks the early mail route between Franklin and Bear Lake; also the first telegraph line. These were established on the old Shoshone Indian Trail. The monument stands where the half-way cabin was, and the first spring developed in Cub River is near the monument. This was named Thomas Spring. The mail was carried on horseback in the summer, and on showshoes in the winter. The carriers would stay in the cabin overnight and go on the next day to Bloomington. The Pony Express brought the mail to Franklin from the south.

Preston Thomas was the first man to carry the mail through on his back in 1861 or 1863. In 1877, he built a cabin n the canyon and had 15 men working there trimming trees by hand with broad axes.

Orsen Neeley had the contract to repair the telegraph line. Elmer Merrill helped when he was a small boy. James Handy and Orson Broadbent were minutemen on the telegraph line, which was the first line in Idaho.

The Indians traveled this trail for years through to Bloomington and on to Wyoming to shoot buffalo. The trail turns north from Thomas Springs, and then east, ending on the other side of the mountains in the north fork of Bloomington Meadows.

The land was given to Franklin County DUP by the Forest Reserve. The rock for the monument was found in Cub River Canyon and closely resembles the shape of the map of Idaho. 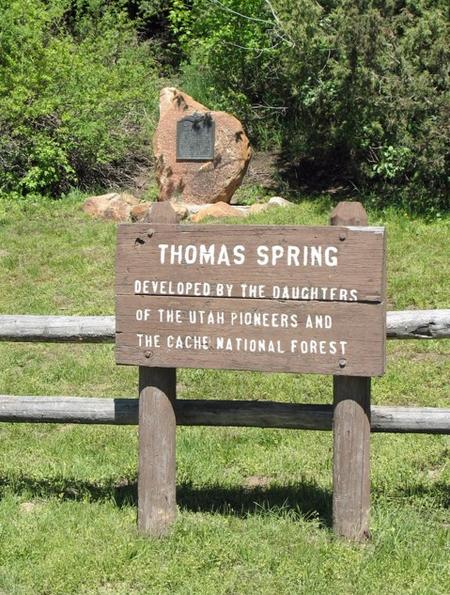 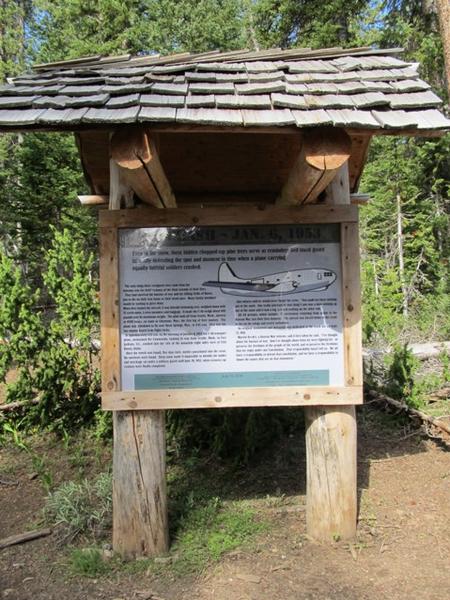 CRASH - January 2, 1953 - Even in the snow, these hidden chopped pine trees serve as reminders and stand guard faithfully defending the spot and moment in time when a plane carrying equally faithful soldiers crashed. The only thing these evergreen trees took from the veterans was the brief memory of the final seconds of their lives. They had survived the horrors of war and the killing fields of Korea, just to die on their way home to their loved ones. Many family members would be waiting to greet them.

When they loaded the aircraft, it was literally brimming over, weighed down with 37 servicemen, 3 crew members and baggage. It made the C-46 weigh about 400 pounds over its maximum weight. The pilot took off from Seattle, Wash. anyways at 0500 hours, enroute to Cheyenne, Wyo., the first leg of their journey. The plane was scheduled to fly over Rock Springs, Wyo. at 4:45 a.m. That was the last anyone heard from flight 1-6-6a.

At approximately 4:12 a.m. on the morning of January 6, 1953, the C-46 transport plane, nick-named the Commando, making its way from Seattle, Wash. to Fort Jackson, S.C. crashed into the side of the mountain eight miles west of Fish Haven, Idaho.

Once the wreck was found, five days later, medics parachuted into the scene. No survivors were found. Deep snow made it impossible  to identify the bodies and wreckage sat under military guard until June 20, 1953, when recovery operations were finally completed.

One witness said he would never forget the scene. "You could see faces sticking out of the snow. One really particularly bad thing I saw was a boot sticking up out of the snow and it had a leg in it and nothing on the other end."

All 40 persons, which included 37 servicemen returning from action in the Korean War, lost their lives instantly. The aircrat was forced down as the result of ice on the wings and severe turbulence.

An original monument and memorial was dedicated at the crash site on Sept. 23, 1967.

Marvin Reeder, a Korean War veteran, said it best when he said, "I've thought about the horrors of war. And I've thought about what we were fighting for - to preserve the freedoms of the people of the world, and to preserve the freedome that we enjoy under our Constitution. That responsibility hasn't left us. We all have a responsibility to honor the names that are on that monument."