All organizations worked together to clean up and refit the building. An entry hall was added along with a rostrum or stage. The MIA gave dances in the Lincoln school house and the ward hall to raise money for lumber for benches, song books and material.  Lumber was bought and benches built.  Song books were obtained. The Relief Society made curtains to separate the classes.  Many plays were put on and taken around the valley to raise $400 for a ward piano.

In 1936 Bishop Bingham and his counselors were released and D. Ariel Nash was sustained as bishop with William J. Tanner and J. Leslie Hobbs as counselors with Abel W. Stevenson as clerk.  The need for a larger hall was felt.  Permission was obtained from church leaders in Salt Lake and as much of the work as possible was done by ward members.  The old building was enlarged and classrooms added.  Within one year the building was completed, paid for, and dedicated.

SOCIAL LIFE
Although many home parties were held, most of the social life revolved around the church and the school functions.

EXCERPTS FROM:
"A History of Linrose", by Emma Bingham, unpublished

FIRST SETTLERS
The first settler in the community was James Frew, who left Franklin, crossed the sand ridge where Preston now is, forded the Bear River and settled just below the hill.  Soon John Davis, Peter Moore, Thomas Smith, Edward Taylor, Louis Lloyd, Don Whittle, William J. Heusser, and Peter Monson came and homesteaded on the flat.  For many years these families lived there and knew the hardships and privations of pioneer life.  Butter, eggs, or anything they had to sell was taken to Franklin, Dayton, or Weston.

When the Oneida Irrigation District (later called Twin Lakes) was developed, the lower canal was brought down to the flat and the water came to these people.  Others now came in.  In 1909, the Nash brothers—Isaac, David and Andrew—bought the school section.  In 1911, H. R. Bingham bought property in Linrose.  Shortly afterward Tyler Bingham, Charles Sparrow, Reuben Taylor, William Beers, John Hobbs, William J. Tanner and Abel Stevenson came.

At first the children rode horseback to Dayton to school, and that is where everyone went to church.  In 1905, the people decided they needed a separate school building.  Peter Moore and John Davis made several trips to Malad, then the county seat, and permission was received to build a school.  John Davis donated an acre of ground and the Dayton School District gave one mile of railroad taxes to help finance the new Roosevelt School.  It was a frame building with one classroom and one teacher for all eight grades.  John McClug was the first teacher followed by James McQueen and Claude Hawkes.  Lincoln also had a school.

In 1917, Roosevelt’s one-room school house was replaced by a larger brick building across the street from the old one.  It had two large classrooms upstairs and two rooms in the basement.  However, never more than two teachers were employed.  When the Westside school consolidation took place, this school was closed and the children went to Dayton or Weston.

Joe Coburn, his wife Emma Jensen Coburn and youngest son Earl.  Mr. Coburn was instrumental in establishing Lincoln School District on which board he served as trustee for years.

CHURCHES
At first, the people of Roosevelt attended church in Dayton.  Later the people felt the need for religious training for their children and Bishop Callan of Dayton wanted to start a branch Sunday School in Roosevelt.  A petition was sent to Boise to the state superintendent of schools to see if permission could be granted to hold Sunday School in the school house.  Permission was granted and the branch Sunday-school was organized in March, 2908.  Thomas Smith was superintendent, William Heusser, assistant and chorister, and Irene Davis, secretary.  Ida Heusser was organist. The Heussers had an organ and it was hauled in a wagon or sleigh, depending on the weather, to the school house each Sunday morning and back again.  In 1909 an organ was purchased and the people—grown-ups and children—paid for it by donation.  It took two years, and the dimes and nickels the children put in were a real sacrifice for they were poor and it meant going without other things.

As the community grew, part of the people went to Weston to church and part to Dayton.  In 1920, the Oneida Stake was divided and the Linrose area became part of the Franklin Stake with Weston as their ward.  In 1922, the people in the Lincoln and Roosevelt school districts met for the purpose of discussing the organizing of a new ward.  A recommendation was sent to the First Presidency of the LDS church that a new ward be organized, and the recommendation was approved.  So the Linrose Ward was organized with Heber Raymond Bingham as the first bishop, Charles Twitchel and Washington J. Thompson as his counselors and Lavere P. Neilsen as ward clerk.  This is when the name Linrose was decided upon.  The school trustees rented the old school house to the new ward at a very low rental.  They later gave the deeds to the ward.   The population of the ward at the time of organization was 105.  Later the people of Lincoln were given permission by the stake presidency to return to Weston Ward. 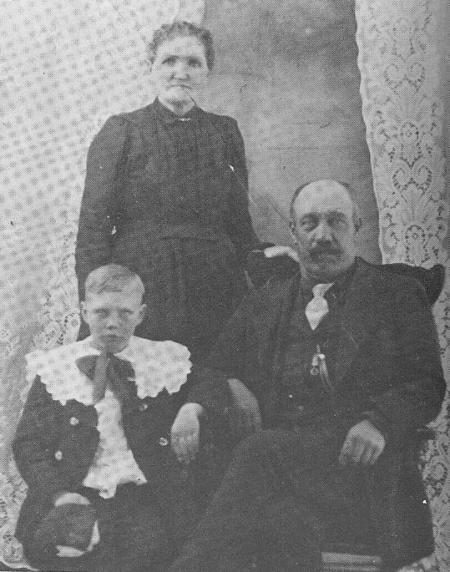