CHURCHES
In the early days, people attended church in Oxford.  On April 23, 1910, following a ball game, a preliminary meeting was held on the southeastern part of the Hyrum Nielson and James S. Geddes farms to discuss how the people felt about forming a ward.  A meeting was then called on May 7, 1910, to investigate the advisability of putting plans in effect for a ward organization.  A committee was appointed to set the boundary lines, and a motion carried to secure ten acres on which to have a ward house and park.  Hugh Geddes donated the property for the school and the church.  This preliminary meeting soon led to the formation of a ward organization eventually named Banida.  At the meeting held October 30, 1910, attended by President Joseph S. Geddes of the Oneida Stake Presidency, parts of the Oxford, Clifton, Winder and Treasureton wards were detached and organized into a new separate ward named Banida with James Daniel Taylor as Bishop.  He was succeeded in 1914 by James S. Geddes, who in 1918 was succeeded by Sidney J. Ottley, then Jeddie L. Miles in 1922 and James Daniel Taylor serving a second term after that.

The new ward members began holding their meetings in private homes and made plans for a chapel.  Building a chapel was no easy task.  The men donated their services and what little money they could.  Amazingly, the chapel was finished and dedicated in 1911.  It was a cement block church house with one room.

EDUCATION
In the beginning, there was no formal school and children were taught the basics at home.  Soon after the church house was completed school was held in the one room.  Regardless of hard times, schooling was never neglected in Banida.  It was soon decided to hire a school teacher.  Ione Maughan of Logan taught the first formal classes.  During the winter months she lived with different families.  From this humble beginning the school grew until the new, two room, yellow-brick school house was finished in 1915 with a recreation center in the full basement.  It would serve the community with as many as three and four teachers at certain times.  A few high school classes were held in the basement as needed.  All the heating was done by coal stoves, and gasoline lights were used at first.  These were later replaced by carbide lights and finally, electricity provided the power when it came to Banida in 1928.  The school district was named 74J, and many in the community served on the school board throughout the years. 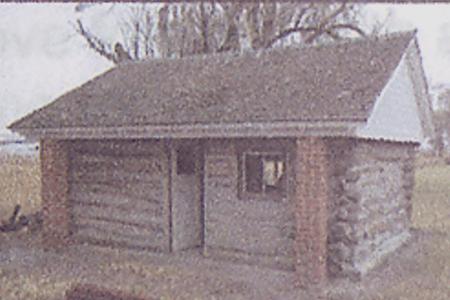 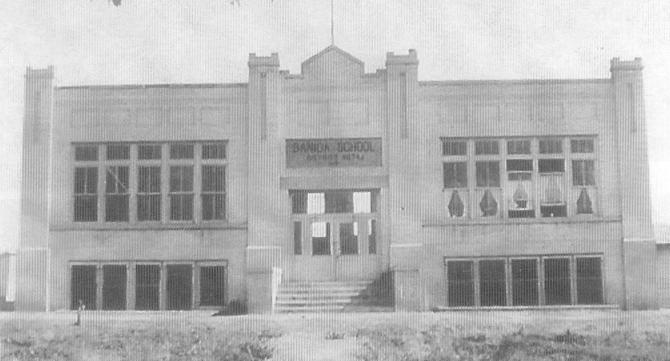 The George and Margaret Sant family, [George was a brother to Nathan’s wife Jane] settled in the area for a few years prior to moving on to Treasureton.  The Harrison A. Thomas family purchased a homestead in 1864, working in the area mainly in the summers.

AGRICULTURE
Since the coming of the first settlers, it became obvious that culinary water was a basic need of the community.  Most homes had to haul water or dig shallow wells to provide water for their household needs.  These needs for culinary water and available sources were not suitable for further growth and development of a growing community.  This prompted a discussion by the community’s citizens and soon the Banida Water Works Company was formed.  The source of the water was a spring to be developed northeast of Banida in the area known as Fox Hollow.

Water was vital for irrigation as well.  Banida gets its irrigation water from two main sources:  The Cottonwood Creek in the spring and early summer and also from the Strong Arm Reservoir.  In the late 1890s a man named Adams attempted to divert water from the Cottonwood Creek.  His intent was to take the water to an area south of the present Rocky Mountain Power sub-station in Treasureton to an area known as Wells Flat.  This difficult project, with the cost, length, and extreme difficulty of constructing such a long conveyance ditch resulted in Mr. Adams abandoning the project.  Following this abandonment, the Treasureton Irrigation Company was organized.  The company received two filings for water from the state of Idaho. Both filings allowed the company to take that water that was in excess of Cleveland Cottonwood rights.  It was at this time that the Company involving farmers in Treasureton and Banida continued the construction of the canal which had been abandoned by Mr. Adams.

The chief industry in Banida was farming, dairy and livestock plus poultry, and the main crops were wheat, barley, alfalfa and sugar beets.

AMUSEMENTS
According to Anna Christensen Swann, a longtime resident, “The church is the main focus in the lives of the people.  All of the recreation must come from this source.”  Banida fielded many successful basketball and baseballs teams.

EXCERPTS FROM:
The Community of Banida Centennial, 1910-2010, written and compiled by Karla Geddes Cattani; assisted by Robert and Carma Geddes and Judy Lindhardt Liebes, 2010.

The cement block, one-room church and school, first in Banida

Banida, an unincorporated farming community, is located approximately twelve miles northwest of Preston on Highway 91.  It is east of Oxford and Clifton, north of Winder, and west of Treasureton. The name Banida was selected when the early settlers met to form a ward and suggestions were taken for a name.  “Geddesburg” received 10 votes, “Smith,” 1, and “Richfield” 13.  Since the center of the community was near the boundary line between Bannock and Oneida Counties, Ezra Allen suggested taking the “Ban” from Bannock and “ida” from Oneida and call the new ward Banida. His suggestion met with the approval of the ward.

PRE-HISTORY
As early as August of 1847, Brigham Young sent an exploration party into Cache Valley.  From an area of nine miles to nineteen there were twelve streams flowing through the country into Great Cache Valley.  By 1855, the Utah Territorial Legislature granted Cache Valley to President Young as a “herd ground” and a company was organized to take some of the livestock into the valley.  The following year marked the beginning of the settlement of the valley and a rapid migration occurred.  Over time, more settlers started pushing farther northward into what was then called “Round Valley.”  By 1867-1868, Brigham Young himself visited the Saints here and even stayed two nights in Oxford.  In reaching the location he would have had to travel through the area later known as Dunnville, present-day Banida, and would also have had to skirt the slew area (Coulam) where there was abundant meadow grass.  According to personal histories, Brigham Young stopped at the “Bean Ranch” as he overlooked the territory as a source for sustaining his cattle.​​

The Nathan Smith cabin, first home in the area, preserved in the Banida Park.

FIRST SETTLERS
In 1871, Nathan Smith, his wife Jane Sant Smith and their four young children were the first pioneers to settle in present day Banida.  The surrounding country at that time was generally known as Battle Creek, named after the infamous massacre at Bear River of the Shoshone Indians in 1863.  This new northern country was a large flat plateau above the river with low rolling hills, covered with a wilderness of grass and wild hay, ideal for grazing the cattle and horses Nathan shared with his father William who lived near Salt Lake.  The Smiths built a log home close to a small creek, about two miles from where the head of the springs ran down a channel cut into the rolling hills and opened into a level valley, just perfect for a ranch.  The original log home still stands today in what is now the Banida Park.

In 1876 the Utah Northern Railroad extended its line.  The terminus was on the north side of the Nathan Smith farm.  Soon a small community sprang up, and the Smiths ran a boarding house during the ten or so years that the boom town called Dunnville existed.  In 1888-89 the railroad moved to the west side of the valley and the track was pulled out.  As a result, Dunnville died a natural death.   T. Morrison, Preston Thomas, and Claborn Morehead with their families settled in the immediate vicinity and secured a lot of land.

About 1905, another group settled where the town of Dunville once thrived and a community rose again.  The location remained the same—a community of Latter-day Saints residing in a farming district.  Some of these pioneers were an outgrowth of the surrounding communities in Southeastern Idaho, including Blackfoot, while others migrated from Plain City, Smithfield, Cove and other areas in Utah.  In 1904 Hugh Stewart Geddes bought part of the Thomas ranch, and in 1905 Hugh S. Geddes and Robert Campbell Geddes bought the “Bean Ranch” (a part of the Old Church Ranch) in the southeast part of the present center of Banida.  Later in 1905, Hugh S. Geddes bought the Nathan Smith farm of 240 acres embracing the present center of Banida.  A year or so later, Hyrum Nielson bought out the balance of the Thomas Ranch.  In 1905 Hyrum Nielson bought Harrison A. Thomas’ original homestead located where the current Cattani home is.  In the meantime, other settlers commenced to homestead government land on the hillsides, and extending into Banida.  They also built houses and fences.  Some people vacated during the winter to live in their former homes. 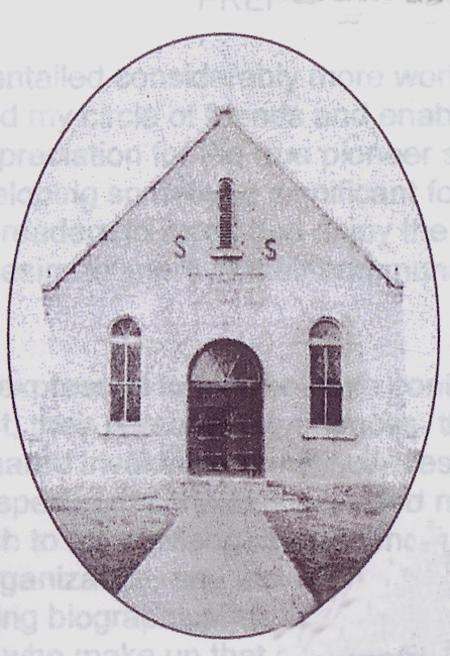