LOCATION AND NAME
Glendale, an unincorporated farming community, is located six miles northeast of Preston, Idaho.  The community is approximately three miles wide north and south and eight miles long, and extends east to the Cache National Forest boundary line, containing in the neighborhood of 15,000 acres.  It was first known as “Worm Creek,” (pronounced “Crick”) the name being suggested from the creek’s crooked and winding path as it meandered through the valley.  When the Worm Creek Ward was organized in 1893, the name “Glendale” was suggested by Oneida Stake President George C. Parkinson for the newly organized ward—the name being thought appropriate because of the location of the beautiful valley.  The population of this community has ranged from 165 to 60 people.

EARLY SETTLERS
Those pioneering this community came from Denmark, England, Norway and the southern States.  Some came for religious reasons, but for the most part they came to better their financial conditions for rearing their families.

Ham Wheeler was the first man to make a homestead entry on the creek in the 1870’s.  He relinquished his right to Thomas Smart who built the first house in the community.  This home was a two-room log structure.  Other early settlers who made homestead entries were:  Dave Miles, Jasper Horne, Joseph Maughan, John Nuffer, John Miles, Johnny McDonald, Ezekiel Hopkins, George W. Hendrickson, Henry Keleey, Andrew Mortensen, a man by the name of “Bosen” and one named “Curtis” whose first names are not known.

These first settlers located on the creek, thus forcing those who came later to make a homestead entry farther out on the bench land.  Among those in the early 1880’s were Henry D. Auger, George K. Owering, William Addison Wagstaff, Mathias Matthew Nelson, Richard Owen, James R. Hebdon, Austin T. Merrill and a man by the name of Torgensen. 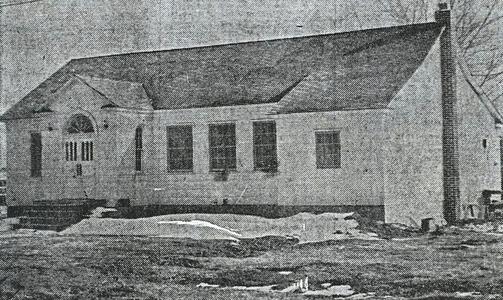 In the early days, the settlement was part of the Preston Ward.  On April 22, 1888, under the direction of Bishop William C. Parkinson and Counselor John Larsen, a branch of the church was organized and called the Worm Creek Branch.  Andrew Mortensen was called and sustained to preside over the branch.  As there was no church house in the community at that time, church was held in the home of Ezekiel Hopkins.  During the year 1889, a one-room, log house, 22 x 30 feet was built.  This building was used for both church and school.   Later a ward was organized and the name of the ward was  changed to Glendale.  In 1901, one end of the log church house was removed and an additional frame building 16 x 34 feet was built on to it, making more room for church and school.  It remained a one-room school, grades one through seven being taught.  In 1914 a new school house 44 x 40 feet, two-roomed, white brick structure was built which was a great asset to the community.  From that time on grades one through eight inclusive were taught with enrollment sometimes reaching as high as forty-five students.

The Glendale Church served as both church and school for the residents.

As time went on people began to move to larger industrial centers which greatly decreased the population of the ward, and on February 19, 1956, the Glendale Ward with a population of 60 people was consolidated with the Preston Seventh Ward, Oneida Stake.  The Glendale church was moved to Preston and became the Presbyterian church house.

In the year 1894-95, the first post office was established at the home of Francis M. Crouch with George K. Bowering as first postmaster.  Mads C. Peterson was the first mail carrier, carrying the mail from the Preston Post Office to the Glendale Post Office.

During World War II, this tiny community, which at that time had a population of only 110 people, had 16 young men and one young woman serving in the Armed Forces.

The land, largely black loam soil, is especially adapted to dry farming with some few acres later being brought under irrigation.  Wheat, grains, and hay are the major crops.  Dairying and the raising of livestock are important sources of income.

In the early days of the settlement, the only means of cutting grain was with a cradle.  In 1895, Henry D. Auger and William A. Wagstaff purchased the first reaper.  Soon thereafter, Hans Severin Nelson purchased the first self-grain binder and did much custom cutting.

AMUSEMENTS
The women in the community spent many social hours participating in quilting bees and sewing carpet rags.  They also gathered wild fruit and berries for winter food.  Other amusements were centered around church and school activities.