You are standing in the outlet of ancient Lake Bonneville. A vast prehistoric inland sea, of which Salt Lake is a modern remnant. Covering over 20,000 square miles when it overflowed here about 14,500 years ago, its winding shoreline would have stretched from here to New Orleans if it were straightened out. This pass was deepened considerably when Lake Bonneville began to flow into Snake River. For a time, a torrent several times larger than the Amazon was discharged here. Finally with a hotter, drier climate that slowly emerged about 8,000 years ago, Lake Bonneville gradually disappeared. 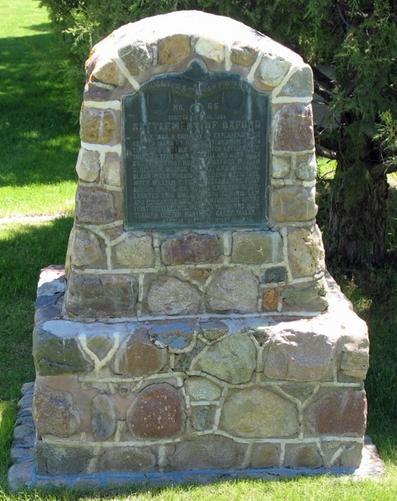 Located on the corner of Center and Depot Street, this fountain was erected in memory of Old Weston School - 1915-1946

Location:  Corner of Center and Depot Street on the church block, Weston

​President Brigham Young directed Mariner W. Merrill to explore new town sites. Out of Merrill's survey, several families from Richmond, Utah crossed the Bear River on April 15, 1885, and settled in the Weston area. The first dugouts were constructed in the Meadows of Cedarville.

The very next year, 1886, a grist mill was constructed by James Mack on Weston Creek south of the present town site. This new mill's location resulted in the relocation of the proposed town. Rocks were hauled from Cedar Hills to construct the new mill. Mack acquired machinery for the mill from Thatcher's in Logan. The grist mill used 3-1/2 foot stone burrs to grind grain, a small grain cleaner, two stands of elevators, and one centrifugal reel. Mack also install a 13-1/4 foot James Leffel turbine that had been freighted to the west in 1859.

Building of the grist mill launched the new town of Weston. It was the only mill on the west side of Bear River. For many years, the mill operated 24 hours per day to meet the consumptive needs of Weston, Oxford, Clifton, Dayton, Clarkston, and Cornish. Weston was also located on the "gold road" to mines in northern Idaho and Montana. Weston settlers shipped flour and other food items northward. The town quickly became a shipping center and was additionally enhanced when the railroad came to Weston in 1890.

The mill was often remodeled over the next 100 years and it also changed owners several times. The mill operated in a modernized world with steel rollers and advanced technology, but it could not survive for very long in the post World War II era. 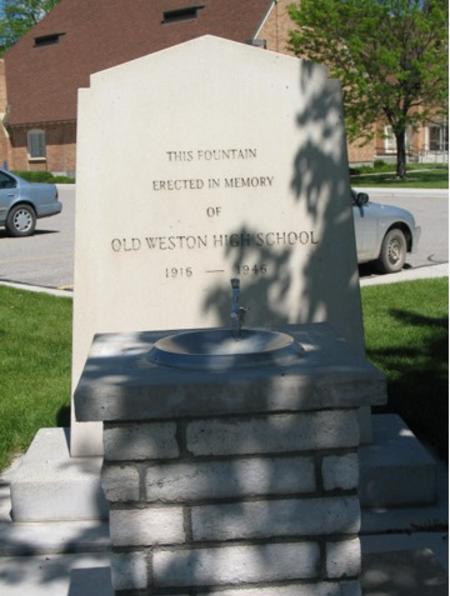 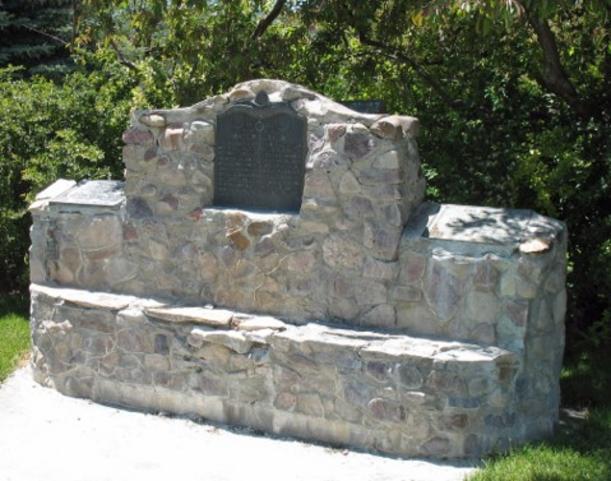 Location:  South of the church parking lot in Clifton

Front - HAROLD B. LEE, 11th president of The Church of Jesus Christ of Latter-day Saints, touched and changed countless lives. Born in Clifton 28 March, 1899, the Bishop (1914-23) Samuel and Louisa Bingham Lee, he inspired students in nearby schools as a teacher yet in his teens.

Back - PRESIDENT LEE gave profound influence to the inception of the Church welfare plan, priesthood correlation, and an expanded world church role. He was sustained an apostle of Jesus Christ in 1941 and prophet, seer, and revelator from 6 October 1972 to 26 December 1973. A spiritual light shined.

The last public blacksmith shop to be opened in Weston (1940s) was owned and operated by Frank Olsen. He kept his doors open and worked in his shop when he was past 90 years old.

Jay Schvaneveldt bought the blacksmith shop from Olsen and has been restoring it. The shop has many pieces of old machinery and the facade is rebuilt from wood Schvaneveldt found on nearby barns and other old structures. The wood it was originally build with was cut and hauled out of a nearby canyon.

Most of the machinery was hand built using electric motors, large belt drives, and ingenuity.

-Information from Jay Schvaneveldt and The Preston Citizen

Location:  Corner of Main Street and Westside Highway by the park shelter

July 1864, a company of explorers were sent to Idaho by President Brigham Young to locate suitable places for settlements. The same year Noah Brimhall and John Boice built the first homes in Oxford. William G. Nelson, George D. Lake, and George D. Black were presiding leaders until 1876 when William F. Fisher became the first bishop. Mr. Fisher, noted express rider, erected this building 1876 for his law and mercantile business. Oxford, one of the first settlements, was for years the main trading center north of Cache Valley.

Today, Oxford is one of the state's 10 smallest owns, but 90 years ago Oxford, Idaho was well on its way to becoming the premier city in Cache Valley.

The town developed some prominence as a freighting center, relaying Cache Valley produce to the mining camps in southwestern Montana. Its big boost came in 1878 when the Utah Northern Railroad reached the city. It remained a major shipping point for areas as far afield as the Caribou mines north of Soda Springs. As late as 1882, the Gilmer and Salisbury stage copany ran a tri-weekly coach between Oxford and Caribou City.

In 1879, Congress established the U.S. Land Office for Southern Idaho at Oxford. Land office business fostered growth. A weekly newspaper, The Idaho Enterprise, began publication. Soon Logan's Northern Light moved its press and type to Oxford, and reissued it as the Banner of Light. So Oxford had two papers and Logan none.

In 1884, the Oneida Stake was organized and it was headquartered in Oxford.

With the passage of anti-polygamy legislation, U.S. marshals were also headquartered there. The Methodist, Congregationalist, and Reorganized LDS congregations dominated the town, each building a school and church. The large cattle ranches outside the city were in the hands of non-Mormon owners. Friction between Mormons and non-Mormons became intense and immediate. It was an uncongenial atmosphere for stake headquarters, and n 1886 it was transferred to Preston.

Saloons lined the main street and Oxford had the reputation of being the Dodge City of Idaho.

Soon the U.S. Land Office was moved to Blackfoot, so the two newspapers moved. After the LDS Church abandoned polygamy, even the federal marshals left. Oxford settled back as a sleep farming village. Today, this town that rivaled Logan in population and services has fewer than 100 inhabitants.

In 1867, Joseph Chadwick and family settled on Five Mile Creek and built a log cabin. In one room he had a supply store to accommodate the few settlers and freighters. He was followed by Peter Poole, Robert Taylor, Stephen Callam, George Mendenhall, Richard Wickham, and their families. The locality was originally known as Five Mile, later Chadville, and in 1890 Card. In 1906, Wm B. Preston gave it the name Dayton. Fred Jensen was the first LDS Presiding Elder.

Location:  8 miles up Weston canyon on Highway 36, traveling west toward Malad; south side of highway

The "Pass of the Standing Rock" was held sacred by the ancient ones of the Shoshone and other Native American Tribes long before John C. Fremont's exploratory party came to Weston Canyon on August 29, 1843. Fremont's surveyors spent the entire day exploring, measuring, and illustrating this location which Fremont named "The Pass of the Standing Rock." Illustrations of Standing Rock were published in Fremont's "The Exploring Expedition to the Rocky Mountains," depicting the Great Basin of the West.

The giant sentinel rock fell from the cliffs above, landing perpendicular near the middle of the valley. The elevation at the base of Standing Rock is 5,381 feet. The rock stands nearly 100 feet tall, is 75 feet wide, and weights several thousand tons. Nearby, naked blue limestone crags spire skyward into pinnacles that dominate ridges the entire length of Weston Canyon.

Weston pioneer settlers arrived from Richmond, Utah on April 15, 1865, temporarily housing their families in wagon boxes, tents, and dugouts. Others dwelt in two large canyon caves. They cut logs for cabins and cedar posts for fencing. Settlers harnessed the canyon streams and springs to construct the original Pioneer Dam, located just below Castle Rock. The buffalo, elk, deer, and antelope were almost extinct because of trappers who had exploited the furs of the valley. Fish and small game provided sustenance until crops could be raised. The pioneers delighted in naming the rock formations throughout the pass: Castle Rock, Vision Rock, Johnny Jump Off, Peek A Boo, Three Bars of Soap, Balancing Rock, Spirit Rock, Eagle Rock, East Gate, and West Gate.

Weston is the second oldest permanent white settlement in Idaho. Bishop Peter Maughan directed construction of the first meetinghouse in 1869. Brigham Young, church president, traveled from Malad, Idaho to Weston by coach on June 8 and 9, 1869; he delighted in the archaeology of the canyon. Young's strict sermon encouraged the agriculture efforts of Weston, especially the farming of wheat.

The harsh winter snows and spring runoffs often closed the pass. In 1960, the road was paved, allowing year-round access to one of the archaeological jewels of Idaho.  This pass has been a place of rest, reflection, reverence, and renewal. It represents outstanding rock, flora, and forest. It is a treasured landmark in the history of the early pioneers. 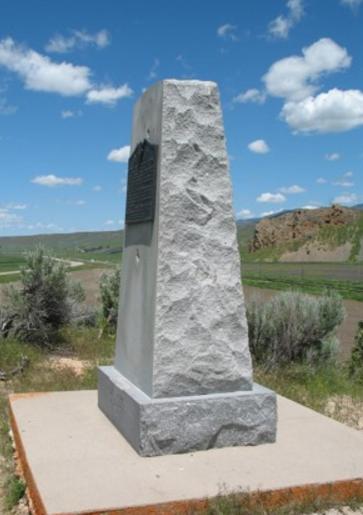 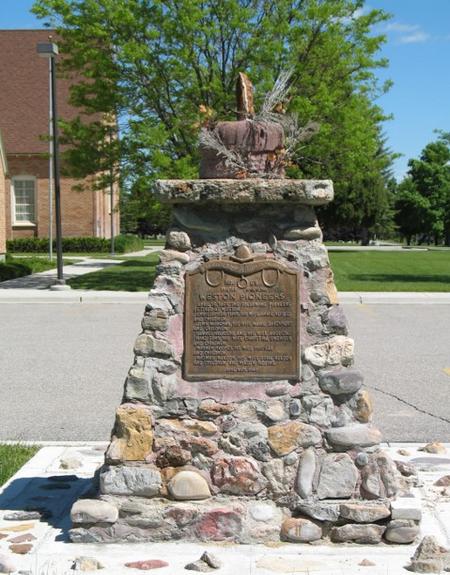 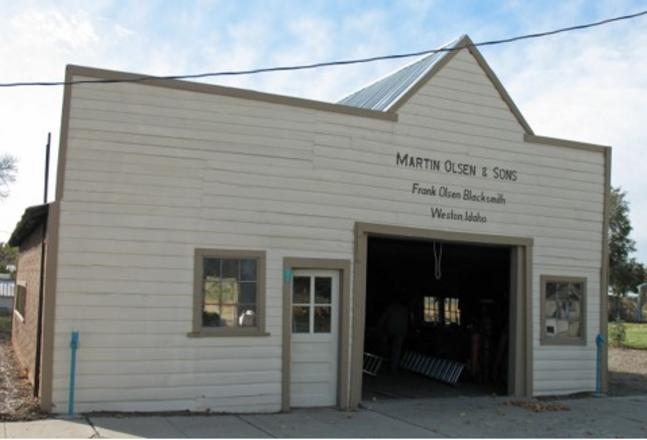 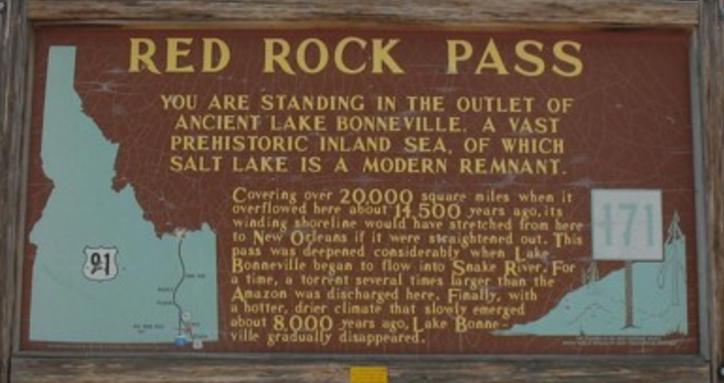 Location:  Confluence of Highways 91 and 23 in Bannock County, formerly in Franklin County

​About 14,500 years ago, ancient Lake Bonneville overflowed at this site. A dam of alluvial between Oxford Mountain to the west and the Portneuf Range to the east suddenly eroded releasing Lake Bonneville from the Great Basin and the Snake River system. The peak flow was about one million cubic meters per second at the pass, or around 500 times the maximum discharge on the Snake River at Idaho Falls, Idaho. Ancient "bathtub ring" shorelines up to 1,000 feet above the valley floor are readily visible in the Salt Lake Valley. Evidence of the flood is visible throughout southern Idaho, with areas of scoured bare bedrock ("scabland") and deposits of boulders ("melon gravel") marking the flood path. After about 22,000 years, Lake Bonneville receded to become the Great Salt Lake. Highly saline and only 40 feet deep, it is but a shadow of the giant fresh water Lake Bonneville.

Red Rock Pass is the geographic northern extremity of the Bonneville drainage basin, and was also designated by the early LDS leaders as the Northern edge of the proposed State of Deseret. North of here, water flows into the Snake, Salmon, and Columbia Rivers, on the way to the Pacific Ocean, but south of here, it flows into the Great Basin and the Great Salt Lake. 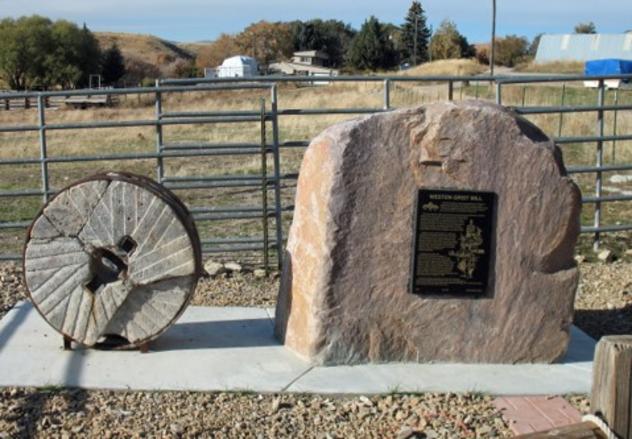 Captain Jefferson Hunt, Soldier, Pioneer, Church-man. Born January 20, 1804 in Kentucky. Died May 11, 1879 in Idaho. Charles Jefferson Hunt served in the Mormon Battalion as Captain of Company "A" and as Assistant Executive Officer in its historic march from Council Bluffs Iowa to San Diego, California, 1846-47. His service won the commendation of all who served with him.

Under appointment by President Brigham Young in 1851, Captain Hunt was guide for the pioneers to San Bernardino, California. His pioneering service included also Provo, Parowan, and Huntsville (which bears his name) in Utah, and Oxford, Idaho.

A convert to the Church of Jesus Christ of Latter-day Saints, he was loyal, obedient, and faithful to the end.

-Erected by descendants of Captain Hunt, and the Utah Pioneer Trails and Landmarks Association 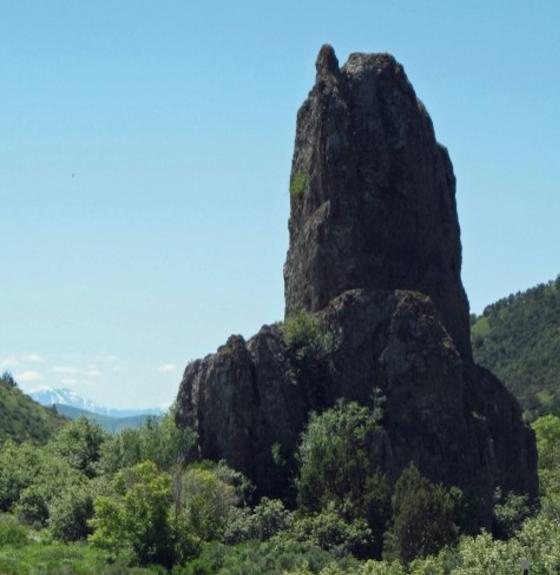 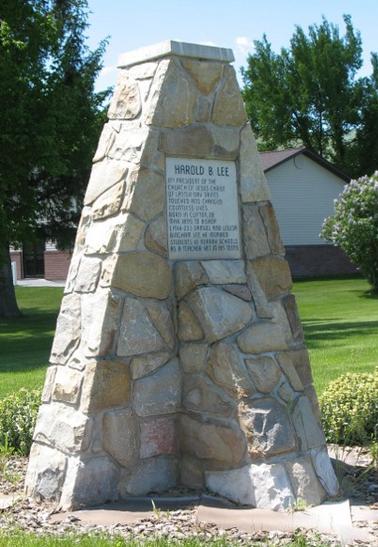