Mink Creek (pronounced “Crick”) received its name from the early settlers because of the abundance of creeks and the many mink which housed themselves along the banks.

FIRST SETTLERS
In the year 1871, James Moran Keller, Sr., and his sons, Theodore, William, Janues and his son-in-law, John Olson, left their homes in Mantua, Utah, in search of land to make a new home.  They came to an unsettled area by way of Franklin, Worm Creek, Station Creek, and Bear Creek.  Upon their decision to stay, they built a log cabin, cut enough wild hay to feed their few head of cattle through the winter, and provided themselves with a supply of wood for fuel.  Janues, age twelve and William, age fourteen, were left to take care of the home, feed the cattle and guard their claim. Sometime during that long, hard winter, Janues became so homesick that he walked on the crusted snow for sixty miles to his parents’ home in Mantua.  William, the fourteen-year-old was left to face the hardships and loneliness of winter alone.  He spent many hours playing his violin during that long, lonely winter.

Early in April 1872, William welcomed his father, his mother, Karren Valentine Keller, and other members of the family.  They had with them some household goods, two small pigs, a few sheep and several head of cattle.

By 1874, many other Mormon families came, filing land claims, building huts, and log cabins and digging caves to provide shelter for themselves and their families.

CHURCHES
Presiding Elders were Mads Hansen and Ramus Petersen.  A bowery was built to meet in at first, but as soon as possible, logs were cut and a twenty-by-twenty-foot, log church was built.  The tithing office was erected close to the church building.  In those days produce of all kinds was taken in for tithing.  This building was later to house those families who were in need of a home--rent free.  It was finally dismantled in the early thirties.  A special meeting was called in 1878 at the home of Hans Larsen.  President Brigham Young and P. M. Musser of Salt Lake City were present.  They officially organized the little community and gave it the name of “Mink Creek Branch.”  Shortly after, Rasmuss Rasmussen became the first LDS bishop in Mink Creek, presiding for twenty-three years.

In 1889, the people of Mink Creek started building a new chapel.  They laid a foundation with the intention of making a log building.  After the foundation was completed, they decided to build a chapel of rock, since rock was quite abundant in Mink Creek.  The rocks were gathered by the wagon load and hauled to the building site.  Sandstone was hauled out of Birch Creek Canyon.  Carl Peterson was the rock mason.  The carpenters who did the interior and finishing work were Lehi Olsen, David Miles, and Adolph Bergquist.  The planning of the lumber was all done by hand.  The people of the little town contributed labor and funds.  In service from 1890 to 1928, the building stood just north of the present Mink Creek chapel. 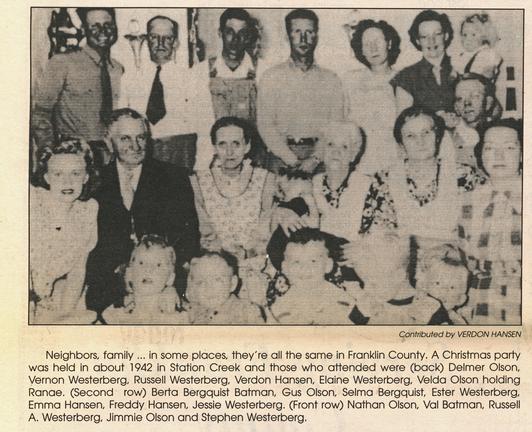 GLENCO
Because of poor roads, little or no road equipment and the slow mode of travel in 1909, the southern end of Mink Creek was made into Glencoe Ward.  It took approximately 150 people from the mother ward.  Glencoe included people from Bear Creek, Station Creek, Matice Hollow and down on the Bear River.

LOCATION AND NAME
Glencoe is located northeast of Preston in what is now lower Mink Creek.  In 1909, President George Parkinson of Oneida Stake called in the family heads of the area to consult on the matter of issues with long distances to Mink Creek proper.  The decision was made that one-hundred-fifty members of the Mink Creek Ward would comprise a new ward.  Because the area was settled in sort of a cave, or glen, they decided to name the new ward “Glencoe.”

The old and new schools in Mink Creek.  The stone building (front) was erected in 1910 and torn down when the new one (back) was built in 1937.  The new school was discontinued in 1964 and students were bused to schools in Preston and vicinity.  Picture taken from Hometown Album, Newell Hart, editor, #63.

Some of the first settlers who came into this area were Peter and Elizabeth Egley who filed a claim on the present Bryce Egley farm.  They came in 1870.  The first settlers up Bear Creek were Stefin and Thamine Christensen, who came around 1883.  At first they lived in a hole in the ground, next a cave, then a small cabin.  Lars and Anna Olsen filed a claim up Station Creek, around 1887.  Glencoe was often referred to as “Sweden,” and often the people were called the “Swedes.”

CHURCHES
The Glencoe Ward was formed September 26, 1909, with Louis Erickson chosen as the first bishop, and Christina Wallgreen the first Relief Society president.  In the beginning, church was held in the small school house, District 23, about where Lee Jepsen’s saw mill now stands.  In 1912 it was decided they should build a ward house and Gustaf Olsen was appointed chairman with John C. Hansen as financial chairman.  Lehi Olsen, who had formerly helped build the old rock church in Mink Creek, designed the building, even though he was no longer a member and had moved to River Heights in Logan, Utah.  Rudger Clawson, apostle in the LDS Church, dedicated the building in 1916.  Much of the work was donated and each member assessed a certain amount of money.  The frame structure had a removable stage with many propos, as well as fine curtains, making it possible to put on plays, programs, etc.  Unusual for that era was a large basketball court.  The new church had seven classrooms and some of the most gorgeous stained glass windows imaginable.  The colorful glass was professionally arranged, leaded, and sealed.  Ruby Olsen was the first baby blessed in the new building.

As communication became easier with better roads, the automobile, and modern road equipment, the Glencoe Ward was dissolved and once again was a part of the Mink Creek Ward.  Bryce Egley bought the church house to use as a hay barn and storage shed.

AMUSEMENTS
The ward had wonderful Christmas parties.  Officers would decorate, have programs and dances.  Refreshments were plentiful.  The only marriage performed in the Glencoe Ward was for Jeff Hurst and Anna Bergquist in 1948.

EDUCATION
Glencoe had its own school, which was also used for a church until the ward house was built.  In 1936, the school merged with the Mink Creek School for financial reasons, bringing the two wards closer together.

AMUSEMENTS
Alexander Baird was the first ward drama director.  His first presentation was “Ten Nights in a Bar Room.”  Drama and plays furnished a lot of entertainment in the early days.  The old log church was the hub for entertainment.  The ward Christmas parties were the highlight of the holiday season, with Santa Claus, a treat and a tree.  Dances were held at the church.

The Mink Creek Ball Park has always played a vital role in the history of the Mink Creek Ward.  In the neighborhood of seventy years ago, the boys always wanted to play ball on Sunday, so it was agreed by the bishopric that a ball park should be built.  It was suggested that the parents give the young people Saturday afternoon off to play in the ball park, thus encouraging them to attend church on Sunday.  Lorenzo Baird donated a choice piece of his land.  The Mink Creek flowed down the north side of the park, with cottonwoods, brush, and wild grass growing close by.  Trees were planted and water carried to them in buckets.  The park was flood-irrigated and the wild grass grew abundantly.   A fence was constructed around it.

The Fourth and Twenty-Fourth of July were big affairs for the people of Mink Creek.  Games, races, rodeos, ball games, picnics, ward and family reunions have all been enjoyed in the park.  Around 1915, a grandstand was built.

ECONOMICS
As soon as possible, roads were built, including a road through Riverdale to Preston, thus eliminating the long route by way of Franklin, Worm Creek, and Station Creek.

The first voting precinct was established in Mink Creek in 1887.  Nels Graham was made Justice of the Peace and David Miles was the first constable.

For many years the mail was carried on horses.  Eph Peterson and Hans Christensen Hansen (who carried it for sixteen years) were two of the early day carriers.  A post office was established in 1878.  Prior to this time, mail was received only occasionally from the Franklin Post Office.  James M. Keller, Sr. was the first postmaster, and William Stone of Franklin was the first mail carrier.  The story goes that on the opening day of the new post office all the townspeople were gathered and ready to receive their mail when the carrier arrived.  When he got there it was discovered that the keys to the mail sacks had been left in Franklin.

In addition to the post office, Mink Creek boasted a general store, a blacksmith shop, an ice cream parlor, and even a pool hall. 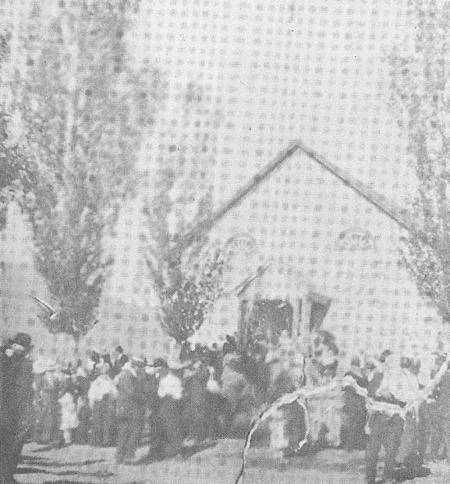 The only picture available of the stone church.  Taken from Hometown Album, Newell Hart, editor, #62 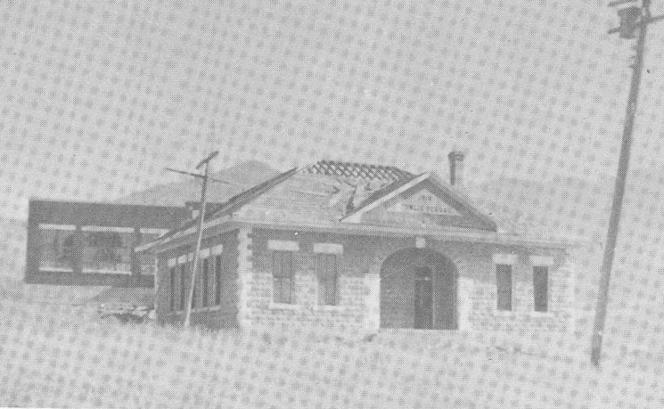