Church
In June 1888, the Mormons situated between Franklin and Preston formed the Whitney Branch of the Church of Jesus Christ of Latter-day Saints.  The following year of 1889, Whitney was organized as a ward with James Chadwick as bishop.  George T. Benson and Joseph Wright were his counselors.  Herbert Rallison was the ward clerk.  The land on which the new church stands today is part of the original homestead of Robert M. Hull.

Amusements
The people created their own recreation, held dances, produced plays and other forms of entertainment.  These were held in the school house.  Children’s dances were held in the afternoons and dances for the adults were held at night.  The music was from an accordion or the fiddle played by Baltzar Peterson or the organ played by Fred Lamoreaux.  Everyone had a chance to dance with everyone else.  The Whitney area was known for its musical talent.

Extracts from:
Whitney Centennial, 1889-1980, Whitney’s First 100 Years.
“It Was Right Over There,” A History of Whitney
The Oneida Stake, 100 Years of LDS History in Southeast Idaho.

​In the winter time the students walked or rode horses to school.  In those early years no regular salaries were paid to the teachers.  Parents donated what they could or about one dollar per month for each child.  Bartering was more common and Miss Foster received her pay in cheese and meat.

The community which had been holding school in the granary and homes decided that they needed a permanent structure for a school and meeting house.  Emil Peterborg, J. O. Lawrence, and David Jensen hauled the first three loads of logs.  Other settlers furnished more logs, lumber, and money for the construction.  The building was begun in Whitney, but after settlers on the west side of Worm Creek (now present day Preston) complained that it was too far for their children to walk, the partially completed building was dismantled and moved to a more central location.   When finished the school was 16 x 18 feet with a pine floor and dirt roof.

The first business district of Whitney was located near the railroad on the lot that was later occupied by the pea vinery.  There was the Equitable Co-op where groceries, dry goods, nails and hardware were sold and housed a shoe shop in one corner of the building, operated by Nephi McLeary.  Albert chadwick was the first postmaster.   Some time later, the post office was located in the Co-op store.  This store burned down.  Later a store was built across the street north of the meeting house by Fred Alder.  Succeeding owners were Serge Benson, then Louis Ballif.  The post office was located in this store until rural deliver was started. 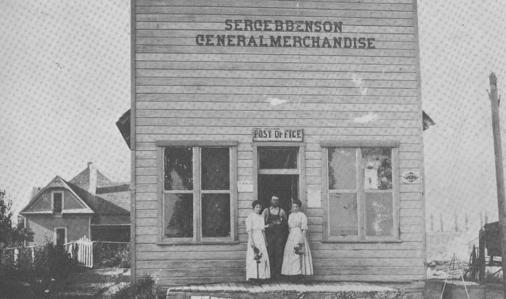 Some white men in the area were more trouble than the Indians.  A number of men, headed by a notorious outlaw leader named Bob Tarter, would help themselves to the settlers’ horses and cattle, drive them to Corinne, Utah, and from that point ship them east and west.  Occasionally, the band of thieves would drive cattle up into Montana where they were sold for a good price.  The settlers suspected who the marauders were but were afraid to say or do anything about it because members of the robber band would not hesitate to kill anyone who interfered with them.

Economics
The main traveled road through the Whitney area was the “Montana-Oregon Freight Road.”  It came from Franklin, crossed Spring Creek, then went west and crossed Worm Creek.  From there it went through the Preston area to the Packer Bridge on Bear River, then followed the route of Highway 91 into Montana.  This road served for the transportation of freight and supplies to parts of Idaho and Montana until the railroad was completed.  The railroad came through in 1878. 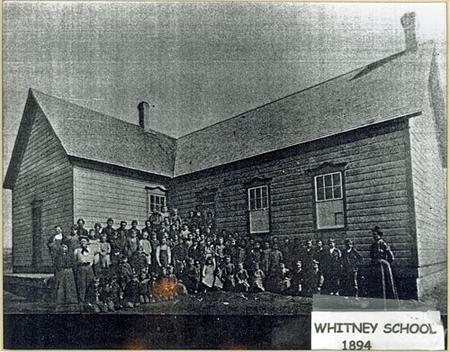 The crops at this time consisted mainly of hay, grain, garden vegetables with some fruits, corn and melons.  Cheese and butter were made by the early settlers and there was meat from cattle and pigs.  Chickens furnished meat and eggs. Native grasses were used for hay as alfalfa was not cultivated until after 1900.  Interest peaked in the production of milk after alfalfa was introduced. One of the first crops to be raised was sugarcane.  Molasses was made from this and supplied a necessary and appetizing addition to the diet of the people.  The first sugar beets were grown in 1899, and later became a very important part of Whitney’s economy.

Irrigation
The pioneers living east of Worm Creek were the first to establish prior water rights by diverting the waters of the Worm Creek through ditches.  These ditches were made with hand plows and spades and were directed to their fields of hay and grain.  William H. Head and others brought water from the upper Worm Creek over the divide to land adjacent to the east foothills.  This group also began building a dam which formed a reservoir to store the water for use when most needed.  This water system was enlarged from time to time and has maintained its identity as an independent water system.  Then the Cub River Middle Ditch Company was organized for the purpose of bringing water over from Cub River.

Education
The first community school was held in Robert M. Hull’s log granary.  This was probably on the lot now occupied by the pea vinery.  It had one window and two doors.  Verena Foster was the first teacher.  Miss Foster was only 16 years old at the time but with the responsibilities shouldered by the youth in these early days, she was mature and able to fulfill this assignment very well.  Sessions were opened and closed with prayer.  Students sang the times tables to the tune of “Yankee-Doodle” and the times tables were written on the board for study.  Miss Foster would sing the songs and then the class would follow.  Old time spelling matches were common and enjoyed by the students.  The children also had an opportunity to “speak a piece” as they said in those days, and everyone learned such songs as “The Sword of Bunker Hill” and “When Uncle Sam First Sent out His Armies to Destroy Us.”  Miss Foster taught during the late summer and fall of 1877 and one term during 1878.  Others followed and taught in various homes in the area.

The Trail Blazer reported:  “ Winter time the students walked or rode horses to school.   Most of the students at that time were fortunate enough to at least have a slate and slate pencil if it were nothing more than a chip taken from the slate rock or a broke piece of slate.  As to books, however, they were not so fortunate.  One of the teachers tells us that there were two books in the first school which meant that the children must stand in rows before the teacher and each take a turn, reading a paragraph from the precious text as it was passed down the line.  Snatching and pushing were not infrequent if the one reading should read past his allotted few lines.  As a form of punishment the “unruly” one was made to stand with a “dunce cap on his or her head.”

Whitney school, built in 1884, across the street east of the public square.

Location and Name
Whitney lies about five miles northwest of Franklin and four miles southeast of Preston on Highway 91.  In the early days it was called “Hull’s Crossing.”  It was later named Whitney after Bishop Orson F. Whitney.

Pre-Settlement
Franklin was first settled in 1860.  Cache Valley was originally called Willow Valley, or sometimes Grass Valley, because of the willows and grass that grew along the streams flowing from the surrounding mountains.  Worm Creek, Spring Creek, and other small springs and streams as well as the flood plains onto which they drained, produced abundant willows and grass, making the land attractive for grazing cattle and farming.

First Settlers
At the time of the settlement of Franklin, the pioneers were having trouble with the Indians.  The Mormon Church counseled those living in the area to share what they had with the natives. The people followed these recommendations and shared their food, animals, and other necessities.  This relieved tensions somewhat, but did not completely eliminate the trouble.  More people were killed, and some Indians continued to steal animals until the problem climaxed in 1863 when Colonel Patrick Conner’s troops killed most of the Indians in a surprise attack called the Bear River Massacre.

It was during this time that settlers in Franklin were assigned small acreages in the Whitney area.  The land was allotted by church authorities and there was to be no speculation.  Each man was allowed what he could conveniently farm.  Because of continued Indian problems, the new land owners were advised to work in groups for protection.  It was also necessary to build fences, as this was an open range for cattle and horses.

In 1869, Ephraim Ellsworth and William Handy each built a cabin on their claims.  That summer, R. M. Hull and James Chadwick formed a partnership, bought out some of the claims, and each built himself a home.  Several other families followed until there was a small settlement established.